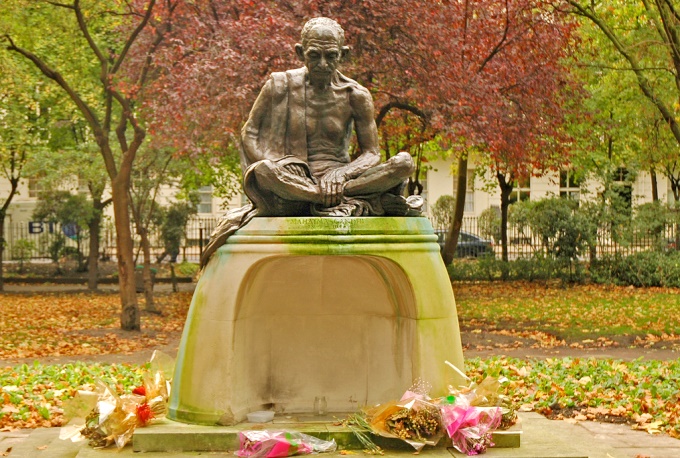 Mahatma Gandhi, the father of our nation, is recognized the world over for his teachings on peace and non-violence. His birth anniversary, 2nd October, is observed as the International Day of Non-Violence by the United Nations. Gandhi’s teachings on non-violence were not limited to conflicts between human beings but also highlighted the need for living in harmony with nature and natural resources. His teachings are therefore even more relevant today, at a time when the world is grappling with an imminent environmental crisis in the form of global warming and climate change.

Almost a century ago, in 1909, Mahatma Gandhi had already envisioned and identified the insatiable and unending pursuit of material pleasure and development in the western society as a threat to the planet and its resources. In his writings compiled in the Hind Swaraj, Mahatma Gandhi had warned the western society of the ill-effects that their over-consumptive lifestyle could bring on the planet. He also appealed to his countrymen to not remain trapped by the thought of material gains.

Warning against the destructive development model adopted by the West, Mahatma Gandhi had noted, “God forbid that India should ever take to industrialisation after the manner of the West. The economic imperialism of a single tiny island kingdom is today keeping the world in chains. If an entire nation of 300 million took to similar economic exploitation, it would strip the world bare like a locusts.” It is indeed this very western model of development, which depends heavily on burning coal and petroleum, which has resulted in global warming and related consequences in the present day. This speaks of Mahatma Gandhi’s remarkable vision and understanding of the relationship between society and environment.

Mahatma Gandhi was a very strong advocate of the philosophy of simple living and high thinking. He did not just preach this but also practiced it in his daily life. Along with this, he worked for every section of the society and believed in inclusive development, which is for all and not just for a chosen few. His contribution towards highlighting the plight of dalits in India, especially through the publication of the weekly journal Harijan, has gone a long way in addressing such challenges in our society.

In 1987, the World Commission on Environment and Development of the United Nations published a report titled Our Common Future. The Report, for the first time, put forward and defined the concept of sustainable development as development which meets the needs of the present generation without compromising the ability of future generations to meet their own needs. According to this Report, sustainable development can be achieved by finding a balance between economic growth, social development and environmental protection. Since all this has already been demonstrated by Mahatma Gandhi through his life and teachings, the Our Common Future Report is but a eulogy of the father of our nation. It is not surprising therefore, to see Mahatma Gandhi’s quotations being used as campaign headlines by environmental activists worldwide. His quotation, “world has enough for every man’s need but not enough for every man’s greed“, has become a global call for sustainability and sustainable development.

A practitioner of non-violence and truth, Mahatma Gandhi lived modestly in a self-sufficient residential community and wore traditional Indian dress or khadi, woven with yarn which was hand spun on a charkha by himself. The Charkha was a symbol of self-dependency and decentralization and represented the act of local production and local consumption. The latter is necessary for keeping a minimal ecological footprint and avoiding harm to the environment.

Mahatma Gandhi ate simple vegetarian food, and undertook long fasts as means of both self-purification and social protest. He also emphasized on maintaining good health, hygiene and sanitation through his own life. It was therefore very appropriate when Mahatma Gandhi responded to a question on what message does he want to pass on to the next generation. “My life is my message”, he had promptly responded.

Mahatma Gandhi had put forward his various thoughts on different aspects of the environment. Many of these were visionary observations and are being realized in the present day. For instance, he had noted how clean air is becoming a scarce resource and soon clean air may not remain freely available. He had forewarned, “Anyone who fouls the air by spitting about carelessly, throwing refuse and rubbish, or otherwise dirtying the ground, sins against man and nature”. In modem day India, clean air has indeed become a scarce resource and our automobiles and industries continue to pollute the air with increasing impunity each day. Mahatma Gandhi was of the opinion that bad air is even more harmful than bad water.

Similarly, Mahatma Gandhi had highlighted how water, air and grains are the three basic foods required by every human being on a daily basis. These resources were therefore to be given utmost care. Gandhi was also a strong advocate of natural healing and nature cure. He attempted to invoke the panch tatwas and create a natural cure system which could be made accessible to every Indian citizen who may not be able to afford western medicines. Throughout his life, Mahatma Gandhi advocated the principle of sustainable development and called for harmony between society, development and environment. His simple and minimalist lifestyle has inspired millions of global citizens for walking on the path of sustainable development.

One of the last notes left behind by Mahatma Gandhi in 1948 is also referred to as Gandhi’s Talisman. It is perhaps, the single most important message for ensuring sustainable development of the global community. The talisman is directed at everyone and especially towards those who need to make a development related decision which may have a considerable impact on the society. This is how it reads, “I will give you a talisman. Whenever you are in doubt, or when the self becomes too much with you, apply the following test. Recall the face of the poorest and the weakest person whom you may have seen, and ask yourself, if the step you are going to take is going to be of any use to him. Will he gain anything by it? Will it restore him to a control over his own life and destiny? In other words, will it lead to swaraj for the hungry and spiritually starving millions? Then you will find your doubts and yourself, melt away.”

Mahatma Gandhi is perhaps one of the first modern environmentalist of India and a champion of the cause of sustainable development. His life is indeed a message that he has left for the entire world as an attempt to promote sustainable living and lifestyles with minimal impact on our common environment.

The following text is part of a radio talk by Dr. Govind Singh which was aired on All India Radio (AIR National) on 2nd October 2016. Image by S. Cozens

One thought on “Gandhi, Environment and the Sustainable Development Pathway”

Views: 57,088
Share this ArticleLike this article? Email it to a friend!
Email sent!