2.0 Movie Review: Because Delhi Too Loves Its Birds 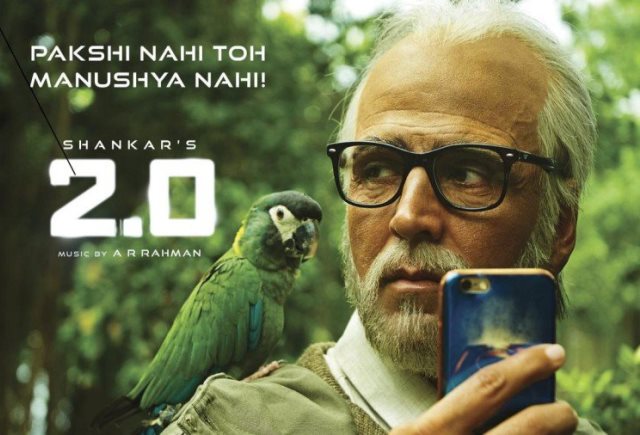 The sequel of the 2010 movie Robot is up as 2.0 and it seems to be doing fairly well. The budget for the film is huge (estimated to be 600 crores) making it one of the most expensive movies ever made in India. 2.0 has been released on 7,000 screens in three different languages (Tamil, Telugu and Hindi). The central theme of 2.0 is the impact of mobile phone radiations on birds. Mobile phones, as we all agree, have indeed become an inalienable part of our lives. The movie attempts to convey the impact of mobile phone radiations on birds and the Environment.

With its big budget and VFX extravagance, the movie is said to have reached Hollywood Standards. But amidst the Rajinikanth hype, grand fighting scenes and the elaborate flashback of the perceived protagonist Professor Pakshirajan (Akshay Kumar), there is a need to review how much the movie lives up to its promise.

The plot of the film goes something like this. One day, all of a sudden everybody’s mobile phones start flying in the air, and get weaned from the hands, purses and pockets of their sundry users. Everyone starts huddling at police stations, filing case against unknown persons. This peculiar case flummoxes both scientists and the Government, including scientist Dr. Vassegaran. The latter has made another wise female robot Nila, after his previous masterpiece Chitti was dismantled by the Government in the previous sequel of the film.

The mobile phones return and start killing big businessmen and politicians and the only option left, when even the Army fails to tackle the big bird formations of these mobile phones, is the resurrection of Chitti. Eventually Dr. Vassegaran succeeds in finding out the mystery of the crisis and in combating with the Professor turned antagonist of the story with the help of Chitti and Nila.

It turns out that Akshay Kumar, the angry ornithologist in the film, is of the opinion that Electromagnetic radiations from mobile phones and cell towers are largely responsible for the declining health of birds by affecting their reproductive capability and making their eggs fragile. It is believed that magnificent bird Arctic tern (Sterna paradisaea), known for the longest migration in the world with the help of Earth’s magnetic field loses its way and dies due to radiation interference. The Cellular Operators Association of India (COAI) has objected that these claims tend to prejudice the ongoing research on whether or not mobile towers have any actual harmful effects.

There isn’t much suspense left in the story after they show the suicide of an old man who hangs himself to the mobile tower right in the first scene. The audience can easily figure out the plot even before Dr. Vassegaran. Still, this gets compensated by the witty lines Nila the robot quips occasionally and a good continuum blend of graphics with real vintages which makes the imaginary fiction come alive.

The concept on which the movie is based is genuine and praiseworthy and the movie is a good instrument to raise issues like corruption and violation of environmental norms and the resulting threats to birds and environment. The dark competition between telecom companies, one click activism are some other issues highlighted. Little wonder then that the Cellular Operators Association of India (COAI) is also alleging that the content of the movie is defaming to its members which include Reliance Jio, Bharati Airtel and Vodafone Idea.

The core message of the film could have been given more space and sensitivity and perhaps mainstreamed in the film. All actors have played their part well though. The music of A.R Rahman is commendable and the lyrics too do justice to the cause. Lakeeron se, Sarhado se, masoom aur anjaan, Kaata nahi, baanta nahi, tumne aasman (Unaware and oblivious to boundaries and sectoral lines, you never divided, never tried to pierce the sky.)

In brief, if you are a Rajinikanth fan, an action lover, a VFX freak looking for a story mired with these attributes, 2.0 is the film for you!

Views: 5,321
Share this ArticleLike this article? Email it to a friend!
Email sent!