The Mysterious Lonar Lake Has Turned Pink Amidst the Pandemic 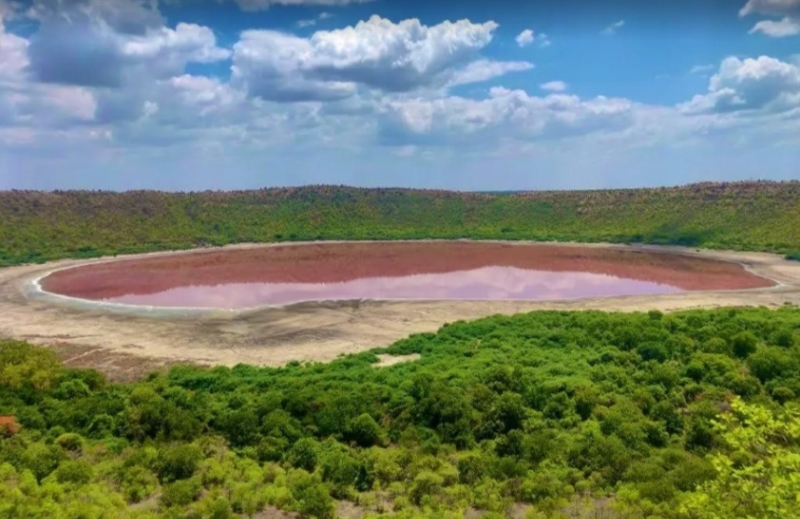 India is a treasure trove of unparalleled traditional knowledge systems, astonishing monuments and land-forms. There are mysteries abundant in every creek and boulder of this rich country. One such enigmatic ecological, geological, astronomical and cultural marvel is the Lonar lake, a National Geo-heritage site.

The Lonar Lake has a diameter of 1.8 km and a depth of about 150 m. The lake is actually a depression in the Deccan traps and is located in present day Buldhana district of  Maharashtra. A Google Image search for Lonar Lake will surely amaze you and its shape may even send you down wonderland!

As if that was not enough, what is even more mysterious is that in an unprecedented event, the Lonar Lake has suddenly turned pink overnight. Due to this, the various legends and phenomena around this lake have resurfaced and continue to puzzle scientists everywhere. The fact that this has happened amidst the ongoing Coronavirus pandemic, is only adding fuel to the speculation fire!

However, to understand the mystery that is Lake Lonar, one has to travel back in time, thousands of years ago. Visualize yourself unaffected by any energy observing the land from the sky and you see a speeding ball of fire that crashes on Earth with a great explosion!

This is one of the stories of the origin of Lonar Lake that is accepted in scientific discourse. Lonar Lake is the creation of a hypervelocity impact crater created as result of a million tonne meteorite colliding with Earth. The collision hit the hard basalt rock, breaking its resolve, and creating what we today see as the Lonar Lake.

The Lonar Lake is the third largest natural salt water lake and the only hypervelocity impact crater in basalt. A series of hills surround the almost circular lake that rises from its basin at an abrupt angle of 75°. The Lake was previously said to be as old as 50,000 years. According to a 2010 Argon dating based study, the crater’s age is ten times the previous estimate. That means Lonar Lake is actually 5,00,000 years old!

The water of the Lonar Lake has a varying pH of 7 to 10. Another mystery here is that the hyper-saline and alkaline lagoon is fascinatingly separated from its freshwater part within the same water body!

Two freshwater streams, Purna and Penganga drain into the lake. The glass like maskelynite is found here, which can only be created from plagioclase due to shock metamorphism, that could be the result from the hypervelocity impact. In a study by IIT Bombay, it was found that the lake soil minerals exhibited properties similar to minerals from the moon brought in the Apollo 11 mission. We can simply say that this lake holds a little piece of the moon!

Like a basket of biodiversity, a sprawling lush forest has grown around this lake. The surrounding vegetation of Teak, Palash, Kewda, Acacia, and Zizyphus is a sight to behold, but the notoriously invasive Prosopis juliflora has found its way here as well. While there is no fish in the lake, it is a birdwatcher’s paradise. There are swallows, shovellers, black winged stilts, brahminy ducks, grebes, herons and lapwings, parakeets, larks and peafowls that can be spotted around here.

There’s a huge microbial diversity as well, nitrogen fixing bacteria and various novel strains of bacteria showing unusual properties have been isolated from the Lonar Lake. The murky waters of the lake are attributed to the Blue Green Algae. Occasionally, gazelles, Chinkara, mongoose are spotted and the monitor lizards are prominently seen in the area.

Almost half a mile from the main lake, there is a smaller depression called the Ambar Lake or Chhota Lonar. It is said to have been created from a splinter of the same meteor. What is both mysterious and fascinating is that at this spot, compasses go haywire! A Motha Maruti temple located here is said to have an idol with magnetic properties.

There are ruins of over 30 mysterious temples around this site, mostly of the 6th to 12th century built in the Hemadpanthi Yadava style of architecture. The Lonar Lake also finds mention in the Puranas, that speak of a demon Lavanasur/Lonasur who was pushed to the pataal by Lord Vishnu. The carvings at the Daitya Sudan Temple near the lake depict this along with many other stories of Vishnu.

Lonar, as the area nearby the lake is called, has been ruled by the Mauryas, Chalukyas, Satvahanas, Rashtrakutas and the Devagiri Yadavas. It also finds mention in Ain-i Akbari as a centre of trade for soap and salt. This site has been exploited for salt by the ruling dynasties and the British. But now these goods are mostly used locally.

Why has the Lonar Lake suddenly turned pink is still under investigation. Preliminary investigations by researchers suggest that it is due to microbial activity coupled with the high salinity which may have increased the carotenoid pigment (the same pigment found in carrots) levels in the water giving it a reddish appearance. The reasons behind this are deemed to be biological and are currently under study.

Lonar Lake is where extraterrestrial sci-fi meets folklore! However, it is also in need of assistance. Pollution, Illegal excavation and unregulated commercial activities have put this unique natural heritage under threat. The area around Lonar Lake is a notified Wildlife Sanctuary, but there seems to be lack of proper conservation measures as well as initiatives that give this site its due recognition.

For who knows what endless puzzles are hiding in its depths?

Image by P. Jain via GMaps.

Pallavi Singh holds advanced degree in Environmental Studies and has a keen interest in rivers and wetland conservation.

https://www.instagram.com/delhigreens/feed/
Views: 1,613
Share this ArticleLike this article? Email it to a friend!
Email sent!