Mining and industrial projects marginalise the poor and exasperate inequalities in the name of development allover the world. Although mining has been promoted as a livelihood option it employs less than 5.6% people in India today. Jharia in Jharkhand which is known for its massive store of primary coking coal and for raging underground coal fire has a different story to tell. The small township with billions of worth of coal is reeling under poverty. The prevailing lawless situation and thriving mining mafia apart from the coal fire literally turned life here a hell.
Experts say it is the unscientific mining cause the inferno in Jharia. The life of more than 4 lakh people in the township is really miserable.

‘Hot as Hell’ by Paranjoy Guha Thakurta seeks to explain why there is underground fire in Jharia for over a century. He also breaks in to the nexus between mining mafia and politicians. The documentary series also features mysterious death and disappearance of those who opposed mining.

Toxics Link invites you for a screening of the film on 11 February at India International Centre.

Anjana Dey holds a Master's degree in Environmental Studies from the University of Delhi. She has been associated with the North-east India focused initiatives of Delhi Greens.

Film Review: Poison on the Platter

Thu Feb 5 , 2009
"Right to choose safe food is a fundamental right of consumers in a democracy. However, the onslaught of GM crops has been robbing the people of their right to choose." This is the theme based on which Mahesh Bhatt and Ajay Kanchan have put together the film 'Poison on the Platter. 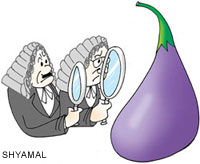