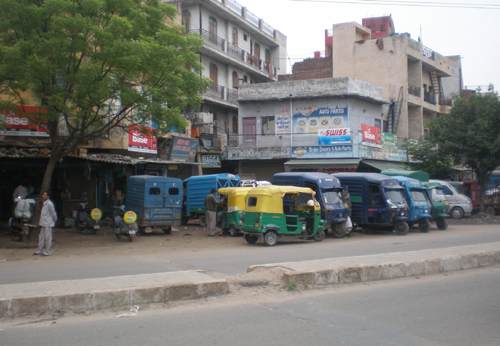 The city of Delhi has grown in two ways. The planned part of the city has grown with the help of the DDA. It has supported the city by planning the physical infrastructure first and then the housing residential areas overlaid on it. That means the roads the sewage the electricity and the water supply pipelines were laid out first. The planning also included open spaces like parks and playgrounds. In addition there were plots of land earmarked for institutional areas such as hospitals and schools and colleges etc. Then plots of lands were allocated for housing to be constructed as either independent houses or flats in multi-storied buildings.

This is the standard way in which most cities in independent India have grown. This ensures there is someone, residents living in these colonies and co-operative societies, paying for the services for the infrastructure that is in place. This is an important part of operation and maintenance costs that are needed to keep the infrastructure functional.

Interspersed between this planned developments are villages that existed before the lands were taken over by the authorities. These have the modern infrastructure amenities superimposed on the settlement after the city has grown around it. These villages and their open and occupied lands do not come under the DDA. Like any settlement which needs open spaces for its settlers these villages also have open grounds, cremation spaces, village forest lands, grazing lands etc. These are also called the Lal Dora lands. But when the modern city grew around these settlements the price of these lands became very high to keep them vacant. Hence these were built up and rented out as commercial property.

While, the housing rentals in these lands were much cheaper than the rest of the city, leading to increased density of population in these villages. As is human nature water pipelines and electric connection that are essential for survival were created by the settlers ‘informally’. But modern infrastructure facilities like sewage, drainage, garbage collection and disposal, bigger access roads were resisted by residents for obvious reasonss.

An interesting thing has happened in Bhuj after the earthquake and in Tirupati Temple town, that faced similar problems. The authorities negotiated with residents using GIS maps and by actually talking to them face to face, and involving them in the planning so that land for these modern infrastructure, was created. The logic was very simple. Each one was supposed to agree to give away a fixed percentage of their land from their plots and every one literally ‘moved back’ a little to allow for widening of roads under which the rest of the infrastructure like sewage drainage and water pipelines was constructed. Thus every one emerged a winner.