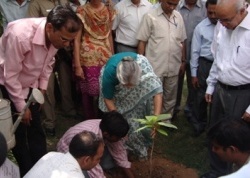 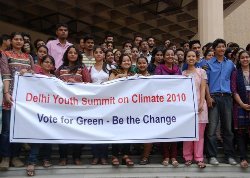 Having almost always taken pride in being one of the greenest capital cities in the world, and led by a green Chief Minister as well, Delhi took the lead again in celebrating 5th June as the World Environment Day (WED) 2010…in style! The Hon’ble Chief Minister Smt. Sheila Dixit “kickstarted” the day by launching an electric vehicle rally from her residence in order to promote zero emission pollution free ‘green transport’ in the city. Supported by Hero Electric, a subsidiary of Hero Group, the rally saw participation from large number of people from all age groups.  From the CM’s Residence on Motilal Nehru Marg, the rally crossed Akbar Road, Shahjahan Road,  Aurangzeb Road, Samrat Hotel to reach the NDMC Commonwealth Garden where a token plantation  drive took place. What a day also, for the CM to release the State of Environment Report for Delhi 2010!

A few kilometers away, right opposite the President’s House, at the residence of India’s first Prime Minister, Delhi Greens hosted the second Delhi Youth Summit on Climate (DYSoC 2010). The Summit saw participation from students and young professionals from across Delhi NCR, and even from others part of the country. Dr. Chirashree Ghosh from the University of Delhi showcased the carbon map of Delhi in her Keynote Speech and the participating delegates were also briefed on how solar works by Gaurav Gupta and why we need to act by Jaimala Iyer.  Prof. Madan Mohan Bajaj also encouraged the youth towards taking action and not losing the connection with our roots.  Dr. B.C. Sabata from the Dept. of Environment, Govt. of NCT of Delhi greeted the youth with an inspirational offer to join hands with the Govt. in greening Delhi before the participants were split into different Working Groups. The event was registered with the United Nations Environment Programme (UNEP) – WED 2010 and was organized in support from the NMML and Oxfam India.

At a function in Vigyan Bhawan, Former President Dr. A.P.J. Abdul Kalam remembered his 100-year old friend, in a speech he delivered on the occasion. He explained how his “biodiversity friend” Arjuna or Terminalia, a 100-year-old tree, in his official residence at 10, Rajaji Marg is as old as his parents. He further declared that environment and biodiversity conservation will indeed be a collective mission of the 21st century for the humanity across cities, states, nations and continents. The organizing committee of the Commonwealth Games 2010 also organized a cycle rally on the occasion. The rally, which started from the headquarters of the Commonwealth Games, was flagged off by Shera, the official CWG 2010 mascot and witnessed an enthusiastic response from the citizens. 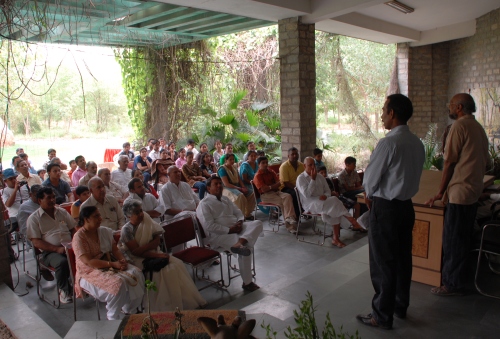 The Park Management at the Yamuna Biodiversity Park (YBP), a joint venture between the Delhi Development Authority and the University of Delhi took a step further on WED and invited members from the local community around the Park to join hands in their efforts. YBP, located near Wazirabad village in North Delhi had initially witnessed some resistance from the local communities. However, after witnessing the good work and the change in the local environs since the inception of the Park, local MLAs and villagers have been all praises for the same. Prof. C.R. Babu from the University of Delhi engaged the participants in a meaningful discussion on biodiversity and life. Also present at the function were Dr. Faiyaz A. Khudsar and his entire team of experts and other staff members.

The corporate greening releases made by Delhi Greens got interesting response from different brands across Delhi NCR. The day also saw much involvement from corporate houses who did several big and small green gatherings and programmes in their office vicinity. In addition, IEEE, the world’s largest technical professional association dedicated to advancing technology for the benefit of humanity, initiates a call-to-action by asking citizens of the world to accept the IEEE Green Your World Challenge. Through the online platform, IEEE invited individuals to take one or more of the five green challenges, and commit to making simple, yet powerful changes in daily life that will benefit humanity and the environment. These and several more initiatives were Delhi’s answer to UNEP’s call for green action this World Environment Day!