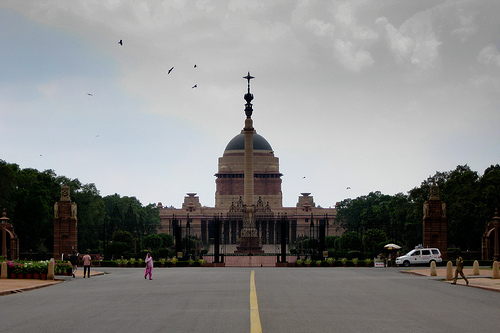 All concerned citizens are called forward once again to observe the Earth Hour today evening as an event marking the need for awareness and action for environmental protection. And if you still think how would your switching off help, and wondering if others are doing it or not, think again! Her Excellency the President of India Smt. Pratibha Devisingh Patil, and the entire Rashtrapati Bhavan will observe the Earth Hour today, from 8.30 PM to 9.30 PM.  During this one hour period, all non-essential lights in the Rashtrapati Bhavan, the President’s Estate and the Family Wing of the President of India, Smt. Pratibha Devisingh Patil, will be switched off. The Residents Welfare Association (RWA) of the President’s Estate has shown active involvement in preparations for observation of Earth Hour and the event will certainly create environmental awareness in the highest corridor of power in the country.

It should be noted here that the President House is a certified green urban dwelling and has an ongoing environmental project entitled Roshni, which is working to ensure a sustainable working of the Rashtrapati Bhawan. During the financial year 2010-11, efforts were made under the Roshini Programme to reduce consumption of electricity in the main building of Rashtrapati Bhavan as well in the President’s Estate. The efforts were successful and over 3.44 million units of energy were conserved in the last financial year. Such a green drive inside the premises of the top office in the country has certainly been an inspiration for the environmental movement in the country.

The Roshini Programme also includes other environmental initiatives which has been of immense benefit to the environment and the residents of the President’s Estate. A total of 3,916 kg of organic compost was produced out of the waste in the Rashtrapati Bhawan last year.  Along with this, 9,027 kg. of vermi-compost was also produced within the premises of the Rashtrapati Bhawan. Water harvesting measures have also been introduced which has led to an overall rise of 2.33 meter in the ground water table. 1 lakh units of renewable energy were produced and Rs.18,500 of petrol was conserved due to use of battery operated solar charged vehicles in the financial year period of 2010-11. As a result, 3,279 tonnes of carbon emissions was reduced, thus reducing the carbon footprint of the Rashtrapati Bhawan. Along with this, a total of 350 trees were added to the already green landscape of the Rashtrapati Bhawan in the previous financial year.