Delhi residents think the climate is changing, environmental issues are worsening and that government should regulate polluting agents, a survey released on Monday found.

2. 5-star hotels in Delhi to take environment-friendly steps by September

All five-star hotels in the city will take a number of environment-friendly steps to cut power and water consumption by September 30, which includes setting up of dedicated sewage treatment plant and solar water heating system.

With neither Delhi’s air nor its noise pollution levels registering a healthy trend in the recent past, on World Environment Day city doctors and health experts have warned about the major health hazards that the city people – especially children — could be exposing themselves to because of the constant exposure to the oppressively high pollution levels.

4. Climate change: New plan may not take off in poll year

The first phase of Delhi’s climate change agenda came to an end in 2012 and the government is now set to bring out its new edition. Within two months, an extension of the existing plan, based on guidelines issued by the ministry of environment and forests, will be released.

6. No development without environment: Jayanthi Natarajan

Environment minister Jayanthi Natarajan seized the opportunity accorded by the World Environment Day celebrations to take on her detractors by stressing that the development versus environment debate was both “unnecessary and irrelevant”.

7. Are we doing enough for the environment?

Delhi’s environment is suffering due to its citizens’ apathy and the authorities’ neglect. But there are those — although a small minority — who are doing their bit to conserve the ecology and environment of the Capital.

Somebody putting nails on a tree trunk in your colony? Or, you want to complain about government agencies not leaving the mandatory 6X6 area around the tree trunks?

On World Environment Day on Wednesday, Chief Minister Sheila Dikshit dedicated to the Capital a 345 kW solar energy project under which power distribution company BSES Yamuna Power Limited has started generating power through 1,257 solar panels that have been installed on the roof-tops of eight BYPL offices, including seven grid stations and two car parks.

When one thinks of the environment, the cost of generating food and wastage is hardly ever considered. That is why the theme for this year’s World Environment Day is Think. Eat. Save. Reduce our Foodprint, which is especially pertinent for India where 40 per cent of food is wasted every year, while millions go hungry.

At one level the city government is preparing a comprehensive plan to combat climate change and at another, civic society is taking matters in its own hands, calling the government’s measures so far to be unsystematic with a misplaced sense of priority. Environmentalists and activists have come together to develop a vision document on Delhi’s environment till 2025.

Seeking to further strengthen bilateral ties, India and Germany on Thursday signed an umbrella agreement on financial and technical cooperation in the field of energy, environment and management of natural resources.

Status of Environment Education at School Level in Delhi

Wed Jun 12 , 2013
The article is a preliminary review of the status of Environment Education in the schools of Delhi by our summer intern, Diksha Kataria. 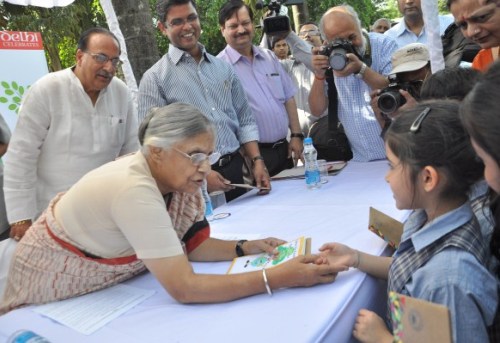