I talked about IPCC‘s contribution in converting the fear of failure of cities as a ‘some day not now’ phenomenon into a right here right now reality. What does this reality look like for our city of Delhi, no doubt a mega city.

Delhi NCR region generates solid waste to the tune of 45,393 tonnes per year. Air pollution levels while are within limits now, are still high. Especially in winters due to inversion, the fog that we have experienced over the new year week, is partly Smog due to vehicular pollution, inspite of actions taken for clean fuel use through CNG.

Yamuna river waters that enter the NCR region, consumed at 150 liters per capita per day, leaves it polluted, as only a small part with only 1153 million litters per day are treated. What will happen to the city over time? It may crash under its own weight, due to mismanaged water sanitation power transport, in short breakdown in urban infrastructure. The present way of doing it, is not sustainable over time.

Small decentralized communities producing their own sustainable power, water and managing their own municipal solid waste sustainably, is suggested as a solution, even within Mega cities. It still leaves the settled community having to deal with dead animals. Today carcasses removal is contacted by our city government to contractors. One of the ‘small is beautiful’ solution to cadavers is Vultures, they are the only birds that eat flesh of dead animals and they pick very efficiently the cadaver clean to the bones. So every settlement needs its resident vultures with open spaces for them to live and food for them to feed. 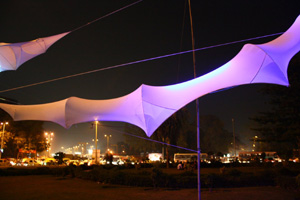 The 48 C seminar in Delhi in December, made us present to ‘Doing’ something, even if it was an artistic representation of Vultures at FICCI Circle. It allowed for all of us to be present to the Vultures. It allowed us to take some time out and think together in partnership for a specific bird, the Vulture – how ever ugly you may consider it aesthetically and the linkages it has with the ecosystem, even though we continue to have our specific favorites for environmental actions.

https://www.instagram.com/delhigreens/feed/
Views: 8,864
Share this ArticleLike this article? Email it to a friend!
Email sent!