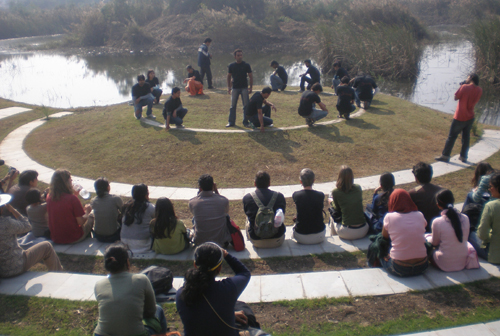 Given the election fever in Delhi there are lots of candidates who are projecting themselves as the best for the country. Different parties have different forums in which they are able to project a party image as well as their candidate profiles that would work for the country and its people.

Among this cacophony of various candidates and parties trying to make themselves heard–one voice of a national party on the radio really stands out. He is promoting himself using audio media very creatively. He has a very unique way of singing himself rhythmically on the radio. He has a whole rhyme about who he is, and what he stands for, and he even has a name rhymes with its surname, as Tarunsing Tawar. At least I am curious to see what he looks like…

Whether that is enough to get him a seat in Parliament is anybody’s guess and time will tell if this strategy works or not. But that is not important. What matters is that he is able to make himself heard on a popular mass media over and above every one else and people will remember him for a long time, irrespective of his winning. Being heard is as important as actually taking the actions, to bring about the ecological change that our city needs or we want to promote.

No doubt we need enough people to take actions to say clean up the Yamuna or promote more Greens in Delhi – our city, but raising awareness about the issue is equally important for allocation of public funding and supported actions. Hence being heard about the cacophony for various other issues demanding attention of the people responsible for allocating resources for development is a pre condition for corrective actions.

Thus, what we want to say is equally important as how we say it, and that in turn is determined by what is our commitment and intention behind saying what we say. If the intention is to take every one along, work as a committed citizenry for Greening the city, the words we will use, the actions we choose to propagate and the way we will say it, will be very different, than if we want to promote Green as an elite agenda.

We will then think of “what is doable in my back yard? And how I can have my friends and neighbours join the actions?. What day time of day will work for them? What actions they will want to get involved ‘hands on?’ What they will be willing to support through money?” Or be clear on some things they will not do no matter what.

Given this sensitivity and understanding towards our neighbours, we may actually get some thing to happen on ground in our neighbourhood, even if it is a simple thing as a meeting of people interested in the issue and getting together to discuss further what actions they are willing to commit. After all every giant movement begins with small steps…

One thought on “Being Heard”

Views: 4,569
Share this ArticleLike this article? Email it to a friend!
Email sent!