We are now nearing the close of elections. With every passing day the new government will be getting formed. Parties will negotiate with each other to form the ruling coalition, as most likely there would be no clear majority. 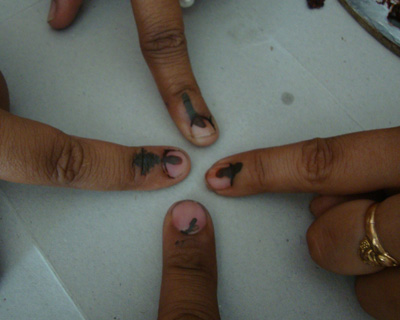 Let us be honest about who we are going to elect and take full responsibility for our choice. Our elected representatives seem to be a particular set of people. Either they are sons of past but successful politicians or they have a criminal background. For us democracy is a political system we have adopted since we became a nation state. This political system is only a subsystem, of the larger system and is relatively new. It is only 50 years old, for the whole that we call India. This democracy is a subsystem we consider to be working successfully especially when we compare our selves with our South Asian neighbours.

But consider the negative ecological consequence that we have maintained a discreet silence about when talking of this success namely, Ecological consequences of the elections that are held practically every few years in various forms loksabaha, vidhansabha, panchayat, municipal council, you name it. The posters, banners, public rallies, media coverage, all have a cost that can be counted in energy and environmental terms.

On the other hand, over the last few months due to elections the government functioning has come to a halt. It is only a care taker government. No major decisions that are at policy level can take place. The positive part was other systems could function uninterrupted. Take Judiciary for example. As published on 10th May 09 in print media, Supreme Court ruled on banning of the mining in Aravalli Mountains till further notice. Mining companies were held responsible for their failure to restore the physical environment after the mining. These Aravalli Mountains are popularly called the Ridge in Delhi, and has a bio diversity park near Vasant Vihar.

Why is this park restoration important? Once we are able to go beyond the slums that dot this park and actually visit the Park we can appreciate the efforts put in for creating the nursery, with a promise to restoring the ecology of the park, including the trees and grasses that have been planted, the birds that now come and visit. We cannot but appreciate the efforts of Delhiites who have succeeded in keeping this ecosystem alive and real. We can see, touch, feel, smell, and hear, nature: right here right now, instead of our TV screens. Not that there is anything wrong with it, but and thanks to the Supreme Court it will continue to be alive and real for us, as it is slowly restored.

https://www.instagram.com/delhigreens/feed/
Views: 5,178
Share this ArticleLike this article? Email it to a friend!
Email sent!