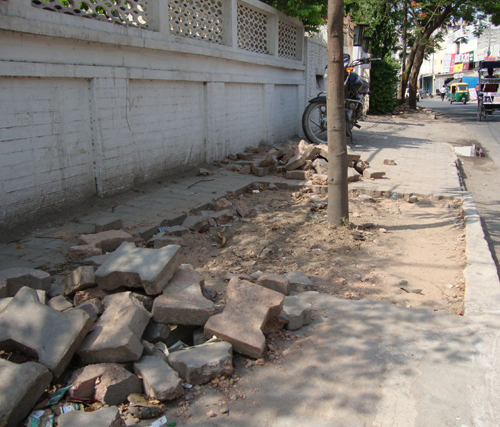 Some of most of the majestic trees in Delhi are all 70-80 (maybe more) years old and form a part of the natural heritage of the city. Each time there is a thunderstorm that brings with it strong winds (of which there have been plenty lately), some of these trees get damaged and even uprooted. It seems (and so would ‘some’ tell us) that it was age that got these trees down. But closer observation reveals a story much more depressing than that.

As Delhi develops into the world class city that ‘many’ are working hard to make it, concretization is the key word. And the concerete does not seem to be seeing an electric pole apart from a tree. And even as much is being said to protect and increase the green cover in the city, the existing greens seem to be choking to death. Most trees are being surrounded by concrete to such an extent that it leaves no breathing space for the tree thus reducing their capacity to keep themself upright.

And all this, even when there exist guidelines from the Ministry of Urban Development and Poverty Alleviation dated July 21, 2000, which specify that an area of six foot by six foot should be left “uncemented” around each tree to ensure that it gets enough breathing space. Add to that, is  a court order that came out on December 19, 2007  after a petition was made to the High Court and taken up by Advocate Ritwick Dutta and Rahul Choudhary as an attempt to reinforce this guideline.

The above was enough for Padmavati Dwivedi and her friends in her GK-I colony to persuade the Government, MCD and related authorities to follow the rules, uphold the law and remove the concrete cement from around all trees in their part of the colony.

The shocking condition of the trees in the GK-I colony had been moving and painful for several of GK-I residents including Padmavati. The latter decided to do something about it and began her phone/fax camapaign by writing to the Chief Minister, and related officers. Before long, she heard from the CM’s office and on 29th April 2009 , workers from the MCD began their work to free the trees in GK-I.

The de-concretization did see some opposition from some residents, especially those who had gotten it done themselves, but the enthusiasm for conserving nature and perserving natural heritage and the court order ensured that the work has been continuing and over 60 trees have been freed till date. What is now needed is a citywide initiative to take this campaign to every colony and complex in Delhi.

Views: 7,597
Share this ArticleLike this article? Email it to a friend!
Email sent!