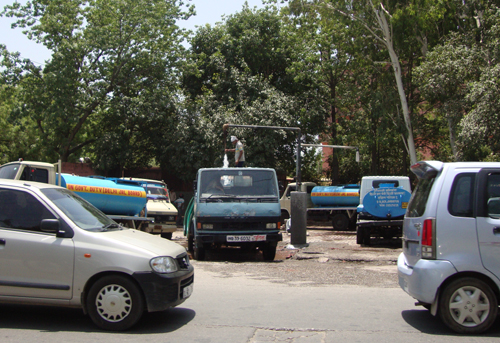 As a reminder to all, MDGs are internationally accepted eight goals which need to be achieved by 2015. The eight goals are as follows:

Further, each of these goals have some specific targets and indicators. Here I would like to concentrate on Goal 7 which speaks of environmental sustainability. It reaffirms that all government policies and development programmes should be in tune with this goal i.e. ensuring a sustainable environment for the world. One of the targets of this goal is to halve the proportion of people without sustainable access to safe drinking water and basic sanitation.

Evidently India is doing well in providing access to improved drinking water resources to its people. But the difference between ‘improved’ and ‘safe’ remains unknown. Even today there are villages in several states of India that depend on an unsafe drinking water sources leading to the spread of harmful diseases among the rural population. At the same time, a large number of villages do not have a single drinking water resource within 3-4 km

There has always been a difference between policies and practice, reality and calculation. It is therefore, the vital responsibility of the common people to find out the truth and ask for your rights. To have access to safe drinking water is your right and mine. It is but a basic human right.

Sampa Kundu wrote for the Delhi Greens Blog as a Volunteer in 2009. She had then just completed her M.Phil from the University of Calcutta.

Public Lecture on Niyamgiri: The Last Stand of Niyamraja

Tue Aug 18 , 2009
Toxics Link’s Environment & Health Public Lecture Series The Last Stand of Niyamraja In defense of their faith and our collective future, one of the world’s earliest indigenous groups, the Kondhs, in Orissa’s Niyamgiri are fighting to save the Niyamgiri Hills from being dug out for bauxite by a multinational […]