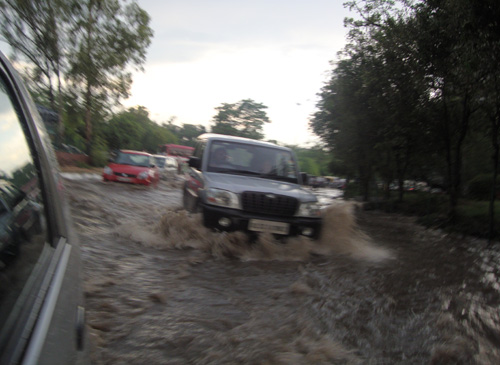 For a city where 98% of the total annual rainfall pours down in less than a month, planning can never be easy. When the latter is carried out hurriedly as if to meet a certain 2010 target, what can happen is what Delhi is witnessing today. A delayed monsoon that gave up to the changing climate met an infrastructure in the making of a ‘world class city’. Roads were flooded with water (and cars), parts of it went down, trees uprooted themselves, the Metro Rail stopped and the traffic came to a standstill. Urban mobility was yet again held ransom. Any by none other than the very forces of Mother Nature which only ask for a sustainable development in exchange.

The first of such downpours in this season, which took place during the evening hours of 27th of July, not just clogged the traffic, it also flooded Delhi and put the spaciously built Lodhi Colony under five feet of sewer water. The stretch from India Habitat Center to Kotla experienced a Mumbai that night and residents (some of whom were living here for the past 18 years) were shocked at something that had never before happened to their part of the city. The water entered the parked cars and stranded several including me in the flood. The rains stopped and so did the rising water level but most ground floor residents did not sleep that night.

Apparently, the nullah adjacent to Lodhi Colony (that separates it from Kotla) is being closed and concertized to make parking space for the nearby Jawaharlal Nehru Stadium (for CWG 2010). The temporary stoppage of sewer water for the construction work could not hold the rains and stormed into Lodhi Colony. With the nullah gone and the sewer outfall into it closed, flood water had no place to go. A clear case of interfering with the natural drainage of the city, leading to a perfectly understood “man-made” disaster.

The next time it rained this heavy in this season was in the second week of August, when a low lying ‘Kaala Baadal’ engulfed the city in its ‘darkness’. The result of this was the same as before, same as it now understood (and unfortunately accepted) in Delhi, only this time, I got stuck in ITO. A trip from DU to CP is never a pain, a max of 30 mins via any route. But when it takes 5 and a half hour to cover this distance, it does not take rocket science to understand that something is very very wrong.

First, the Minto Bridge underpass was flooded (and an auto already stranded more than half drowned) and all traffic diverted to the left…to ITO! The journey till ITO was a bumper to bumper at a snail’s pace. And since the right turn to the main India Gate road was not allowed, one had to go straight en route to Lakshmi Nagar and take a U-turn. Just that the U-turn meant going on top of the ITO flyover (Top Image). The base of this U-turn had 5 feet of water accumulated and in the ‘heat’ of the moment, I just had to take that turn. By the time I waded through and reached on top of the flyover, I could see smoke coming out of the bonnet. Scared of the recent car-fire accidents, I quickly jumped out and opened it, while realizing I was not alone! Turned out the water had touched the heated parts of the car (which was stuck in the traffic for hours) and was turning into steam. The shock has still not gone, it could have been much worse. 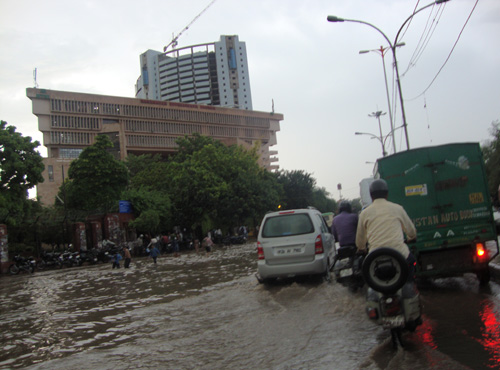 Every day, hundreds of new cars are introduced to the Delhi roads. Agreed, the Government needs to bring in measures to discourage commuters from using (and buying) private vehicles, but if this the way it has adopted to do so, it is both inhuman and unbelievable. Usually a Metro rider, my car is out when needed for multitasking. Now, in the rains, it is never out no matter what. But then again, if the Government was really serious about promoting public transport would it have really come up with plans to make the large number of underpasses and flyovers in the city? What these do to the city during the rains is demonstrated above.  But there is more to it that what just meets the eye.

The construction of underpasses and flyovers (and road widening eating up the footpaths) are a reassurance to the car owners and a go ahead gesture to prospective owners that the city can do with some more. That if the road space becomes less or the number of vehicles increase at signals, we will cut sideways, go up, go down but do whatever it takes to make sure more (and more) vehicles are always accommodated.

Anybody who has been on the Delhi road can say with a great degree of certainty that there is more pressure on the roads than it can hold. The situation is only getting worse and what is needed is a policy which facilitates the cutting down of cars in the city, not promoting their sale. Flyovers and underpasses are doing just that, not only are they temporary reliefs to the traffic situation, they are also hurdles to pedestrians and discourage walkability. Putting a flyover to cross a railway track makes sense. Putting a flyover (or underpass) to cross traffic is like an arms race. And even in that, there is a point after which there is a nuclear holocaust.

Views: 14,031
Share this ArticleLike this article? Email it to a friend!
Email sent!