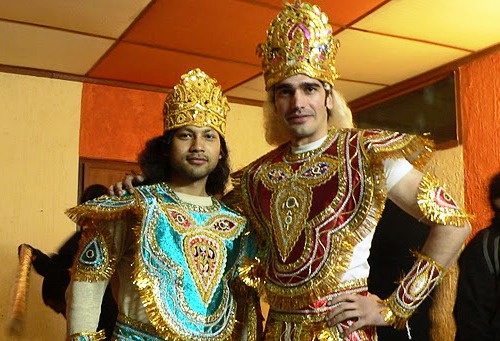 Antraal Theater Group presents “ Ek Aur Drornacharya” – a play written by Shankar Shesh, as a re-interpretation of the character of Drornacharya in the light of the modern education system. The  play tries to situate a protagonist, Prof. Arvind in the web of the allegiance that powers on.

How did Drornacharya become the biased teacher? What conditions led Arvind to compromise with reporting a student’s act of cheating? Vimelendu’s ghost comes as the alter ego of Arvind who forces him to compromise with the demand of the situation, though when alive, he was the one who directed Arvind as Drornacharya in a play. When Arvind is finally jailed with charges of corruption, we see how it is inevitable end of a cumulative process of compromising with the system.

Antraal is an independent theatre group of individuals who pursue theatre purely out of interest. The other two plays presented so far are : “Mausam Ko Na jaane Kya Ho Gaya” and “Jis Lahore Nai Dekhya , Oh jamiya Nahi”. In  addition, Antraal has previously been involved with Delhi Greens in street theater performance for generating awareness on the impacts of climate change and environmental degradation.

One thought on “Invite: ‘Ek Aur Drornacharya’ Play by Antraal”

Views: 7,068
Share this ArticleLike this article? Email it to a friend!
Email sent!