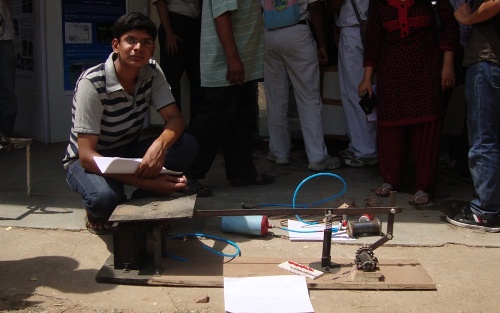 A research project on generating energy from walking, at the IIT-D Tech Fest

The famous quote which says, ‘necessity is the mother of all inventions’ has been the driving force behind many engineering innovations and studies. The Open House 2010 hosted by the Indian Institute of Technology,  Delhi on April 24, 2010 was indeed a door-open to check out what goes inside the classes and labs of IIT-D for working out solutions to the existing needs of human existence. Conducted as an annual exhibition, Open House has been a ritual of technocracy and acts as an interface of the institute with general public. It also has a special focus on school children. Nearly 300 projects of the students as well as of the faculty were exhibited.

The first department that caught our attention was rural technology. Since technological challenges are faced more by rural people and inadequate implementation has been crippling rural development, our focus was to check out how the technocrats are planning to come up with solutions and execute their so called ‘technocracy’.  Projects like ‘Improved Biomass cooking stoves’, ‘Synthetic milk’, ‘Urine harvesting’, and ‘Development of Eco-friendly preservatives for Bamboo species’ promises a lot to improve rural living conditions but the packages comes with challenges on its implementation part. As always, cost effective plans will be the ruler on the execution front. Hence the role of the government to work out subsidies and grants for implementing the projects and putting the best of technology at work, was felt indispensable.

What caught the limelight during the exhibition was the “Solar Refrigerator” which was displayed by an applied mechanics student Siddharth Garg. The name of the project was good enough to attract many an eyeballs. The department itself stands for mechanical engineering being applied to improve and leverage functioning of various products. The normal refrigerator available in the market can only be run by electricity and hence saving energy has been a challenge faced over years, especially in places where extreme heat leaves no option for people to even think of saving energy.

However, the model beat the heat and proved that heat which made us use refrigerators could be enslaved to serve the product functioning. The normal compressor here was replaced by a compressor that runs on solar energy. As explained by Siddharth, the model was built keeping in mind rural areas where the greatest challenge is inadequte electricity supply. The question that ran throughout the explanation process was, ‘why don’t we use the alternatives in urban areas as well, when the sun doesn’t distinguish between people living in rural or urban areas, but equally beats all with its heat’. Technology is far wider a subject to be compressed to a limited area of implementation. The climate change affected environment needs “techno-heroes” to save the earth with innovative interventions and answer to the ‘need’ for a better tomorrow.

Views: 19,633
Share this ArticleLike this article? Email it to a friend!
Email sent!