In response to numerous requests from various stakeholders, the central Ministry of Environment & Forests (MoEF) is in the process of completely banning the trade of peacock feathers. Despite this, the selling of feathers of our National Bird is rampant across the Delhi NCR. Though the usual street shops are no longer selling these openly, the feathers can still be seen being sold on the streets around CP and ITO and even in markets like Kamla Nagar and Sarojini.

The demand for the feathers far outsrips the supply leading to rampant poaching and killing of the birds. Sections 43(3)(a) and 44 of the Wildlife Protection Act 1972 relates to the transfer and sale of the tail feathers of peacocks. Currently, the Act prohibits the killing of peacocks as well as export of tail feathers or articles made from them. But domestic trade in feathers or articles is allowed under the assumption that these are naturally shed. This is what is exploited by the domestic traders and is therefore being amended by the MoEF. 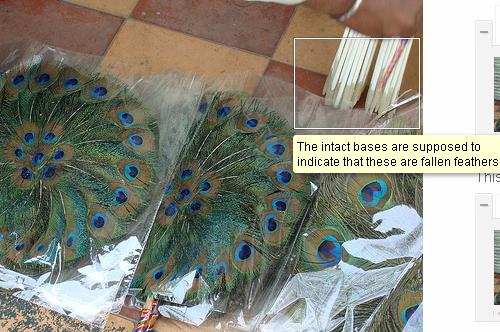 Delhi has a healthy peacock population thanks to the patches of green spaces in almost all districts of the NCT. In fact, we have received numerous emails especially from residents of Palam about the issue of too many peacocks and therefore the birds becoming easy target of children and even dogs. Even the Central Delhi area has a rich peacock population which is rivaled only by Delhi University even though rampant construction in the city and consequent habitat destruction is now threatening their safety.

While this ensures that at least some of the feathers being traded may well be fallen ones, that still does not help in any manner. The feathers, as do any other part of the bird or animals, belong to nature and need to be left at that. These enrich the soil with nutrients and inputs that were supposed to remain in the top soil, not in your living room. Just like a tiger skin is best on the tiger, peacock feathers are best on the bird, or in the soil. Taking them away is like burning the fallen leaves instead of letting them decompose, and should be banned likewise.

Views: 9,378
Share this ArticleLike this article? Email it to a friend!
Email sent!