Yamuna’s Fury in Delhi, A Nature’s Reminder to All 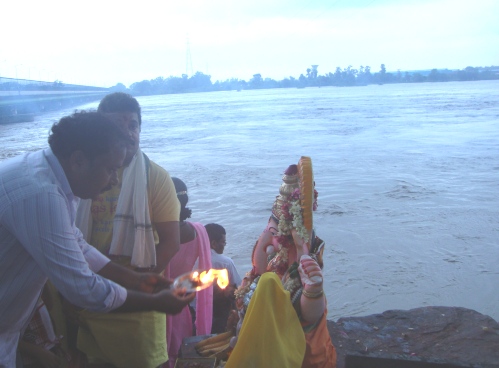 Chanting to their lungs capacity, the praise of Lord Ganesh, “Ganpati Bappa Morya, Mangal Murti Moraya”, along the banks of River Yamuna, thousands of devotees assembled to bid farewell to the Lord of prosperity and urged him to come back soon next year. The waves of the river was in its high energizing motion and with open arms welcomed the Ganesha. The release of water from the Hathinikund barrage upstream in Haryana has swollen the Yamuna and it is flowing well above the danger level of 204.83 metres in Delhi, and it has been more than once that this level has been crossed in this season alone.

Heavy rainfall in the catchment area of Yamuna in Uttrakhand has resulted in the heavy inflows into the Yamuna.  On Wednesday morning, the river was flowing at 206.92 metres — 2.09 metres above the danger mark, showing her fury to the human race. Delhi has degraded the quality of its pristine water in a past decade by adding enormous pollution to it. Due to rise in water level, the old iron bridge over the Yamuna, linking the capita’s East and Northeast districts to the rest of the city was closed down.

As the river water crossed the danger mark, several low lying areas like Garhi Mandhu, Old Usmanpur Village, Monastery Market, Civil Lines, ISBT, Mukherjee Nagar, Indra Vihar,  Burari Village, Mayur Vihar, Okhla and Batla House got flooded. The flood water has entered houses of people living in these areas, forcing them to either evacuate the place or remain on their terraces. The nature’s fury has not even spared the Commonwealth Games Village and flood water entered here too, showing its anger to the invasion of man into the territory of the river Yamuna.

The flood has severely effected day to day life and even the train services from Delhi were either diverted or cancelled. The highways are flooded with water across North India, breaking Delhi’s connection with the other states. To worsen the situation, the city is also witnessing heavy rains over the past few weeks resulting in water logging and traffic jam at various places. DTC’s Indraprastha Depot is also water logged due to the heavy rains. An official here informed that the drains are now working and his plea to pump out water have so far fallen on deaf ears. Most drains are closed from entering Yamuna which has resulted in the backflow of sewage water in localities and slums close to the river.

In the coming days, Delhi will be hosting CWG 2010. But the floods in Delhi, and the existing weather condition, will indeed be a major obstacle in the successful completion of the Games. The Organizing Committee and Delhi Government remains hopeful about the success of the Games even as the water logging could lead to a severe epidemic. Despite this, the Organizing Committee Chairman Suresh Kalmadi has gone on record stating, “Nature has been a little problem…there have been many challenges and we face up to many challenges and things will work out very fine”. It is just to mention here that nature HAS NOT BEEN A PROBLEM ever. It is us humans rather, our prevailing greed to win over nature is the root cause of all our miseries.

The Games Village which is constructed on the floodplain of the Yamuna river is a problem to the river as it is constructed in the river’s territory. This was strongly opposed and protested by several environmental organisations including Delhi Greens even before the construction had begun. A “floodplain” is that plain where flood water is “supposed” to come, and leave behind fertile land after the floods. For Yamuna river, this happens only for a short period of ten days to two weeks every year. For the rest of the year, the floodplains lie dry though continue to perform the function of groundwater recharge. Constructing a Games Village on the water’s way, was indeed inviting trouble that has now come!

Mahatma Gandhi could not have been more right when he said, “There is enough for everyone’s need but not for everyone’s greed”. The damming of the river at Wazirrabad Barrage, the diversion of the water for drinking purposes and dumping sewerage of the city from the drains has completely changed the face of “Yamuna”. It was merely seen as a stenchy drain. Human greed and unsustainable development approach even took away the river’s right to flow.  We took away the River’s self cleansing mechanism, and its right to flow with clean and pristine water.

But as has been the tendency of man, to learn only after disasters and try to  be resurrected, we seem to have forgotten the power of nature and its fury towards the greed of mankind. It knows how to make a balance between the right and wrong, and this is very well the final wake up call for us to respect our natural resources and stop taking them for granted. The flooded Yamuna river is a warning to all of us, “DONT MESS WITH ME…I’M STILL THERE AND WILL BE UNTIL LONG AFTER YOU’RE GONE”.

Views: 9,310
Share this ArticleLike this article? Email it to a friend!
Email sent!