What Did You Learn From Your Father Dear India? 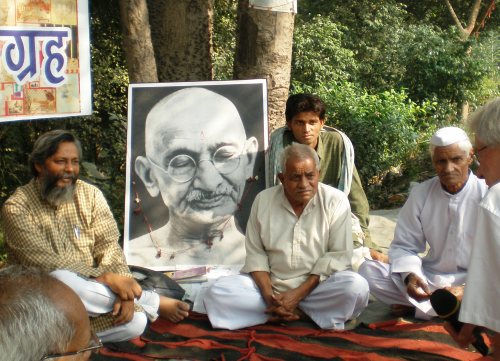 File photo: Rajendera Singh being interviewed by Swiss media over the Satyagrah against the construction of the CWG Village on the Yamuna floodplain in Delhi. Bapu was witness to the Satyagrah (that did not work) for protecting the Yamuna throughout and also to the inundation of his Samadhi (consequently) with the Yamuna water this season

On behalf of the Delhi Greens organisation, the DG Blog wishes all our readers heartiest greetings on the occasion of Gandhi Jayanti. As far as I can remember, every Gandhi Jayanti since my childhood days was celebrated by cleaning the colony and nearby areas. Me and my friends used to come together and join the elders in the clean up drive. After the tiring ordeal, we would all have refreshments together in the colony playground. None of us, me and my friends, knew or ever questioned why we were cleaning up the colony on ‘Gandhi Jayanti’. All we knew was that it is the birthday celebration of Mahatma Gandhi, the Father of our Nation.

Now that I have a better understanding of Gandhi and his teachings, I think it has also equipped me with some of those answers. We were told, amidst much questioning and debates, Gandhi said,“Earth provides enough to satisfy every man’s need, but not every man’s greed”. His philosophy and ideas have become clearer and more acceptable the more I see their practicality in the real world. His simple lifestyle promoting the use of local products like khadi makes more sense in today’s world, threatened by climate change. Three important philosophies of Gandhi are Satyagraha (Non-Violence), Sawaraj (Home Rule), and Sarvodaya (Welfare of All). Today, the need and importance of Gandhi’s philosophy and ideals are felt like never before, especially in a city like Delhi. Grilled under the heavy burden of hosting the Commonwealth Games 2010, the capital city definitely need to re-live his philosophy.

I couldn’t help but wonder what Bapu would have to say to such an event being hosted in the capital city. During his days, satyagraha was used essentially to achieve political ends by non-violent means while sawaraj and sarvodaya sought to encourage through social work, spinning of cotton, rural development, and social welfare, ideas of individual and collective improvement and regeneration. According to him such regeneration was necessary if India was to rediscover Her enduring historical and religious self and throw away British rule. Now the Games are here and the preparatory work has been haunting every citizen in the city in many aspects of their lives. The corruption news already thrashed national pride, unhygienic living conditions in the Games Village killed the welcoming spirit and compromised infrastructure facilities marred India’s development progress report. The city seems to be crying out for redemption and calls for a major ‘clean-up drive’, in all sense of that phrase.

Gandhiji’s ‘Quit India’ movement was a historical clean up drive and a remarkable act to restore India’s identity and freedom. Like cleaning up colonies and public spaces during Gandhi Jayanti, we all need to initiate clean-up drives against corruption, imbalanced development, non-inclusive implementation of policies, etc. Before others raise the big question, ask us what we have learnt in the little more than 60 years of our independence, we Indians should begin to live the true spirit of nationalism and let lessons from the past lead the way ahead for a better nation.

During his speech at the Ahmedabad meeting on January 1, 1918, Gandhiji explained the importance of purity of air, water and food. He said, “Air, water and grains are the three chief kinds of food. Air is free to all, but, if it is polluted, it harms our health. Doctors say that bad air is more harmful than bad water. Inhalation of bad air is harmful by itself and this is the reason we [sometimes] need change of air. Next comes water. We are generally very careless about it. If we were to be sufficiently careful about air, water and food, the plague would never make its appearance among us.”

It is time we listened to great thoughts and learn lessons from the past as alarm clocks to wake us up from slumbering into unsustainable development. The price we are paying of ignoring environmental protection in regard to health is certainly high and many lives have been lost to widespread of diseases like dengue. These could very well be prevented if we all lived up to the principles of healthy living and do our part of social work in cleaning up the city. It is time we join hands to bring sarvodaya in each and every step we take towards development. The nation, for whom many precious lives were sacrificed in the struggle to attain freedom, should not easily fall into the bondage of corruption and anti-nationalism acts again.

Today as we remember and celebrate the birthday of the Father of our Nation, the great man who not only taught us valuable ideals but also lived them, lets honour him with our commitment towards taking the nation on the way to sustainable development. It’s high time we “clean-up” our nation and attain sawaraj! After all ‘Cleanliness is next to Godliness’.

2 thoughts on “What Did You Learn From Your Father Dear India?”

Views: 6,200
Share this ArticleLike this article? Email it to a friend!
Email sent!