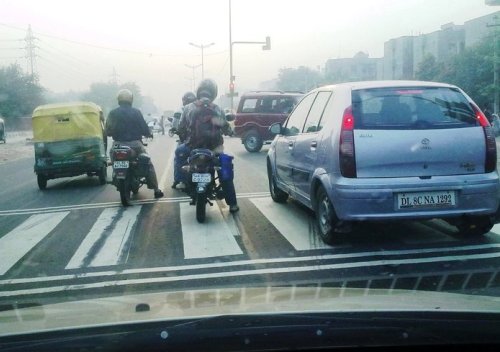 Images like these, shot from a smart phone, are being submitted aplenty on the Delhi Traffic Police’s Facebook Page, to register complaint about vehicles violating traffic rules!

“Look! Polythene bags all over the tree and the wire fence…”, he shouted with excitement that was driven by a cause to make the world a greener place and safe from polybags. Another second, and I heard the ‘click’. Now it’s captured and would be shared with many concerned people so something can be done about it. I could not but acknowledge the satisfactory smile that came over his face for owning such technology, a smart phone that can be used for ‘phono-graphy’. One of the first photos we took with an old smart phone back in 2007, of leaves being burnt in different parts of Delhi, we had the good fortune of quickly following that post up with the Government taking note of this and notifying to prohibit the burning of leaves across Delhi.

Since the day we bought this new phone that I usually refer to as C4C (Click 4 Cause), we have never faced one of those old days when we used to frown and curse ourselves for not carrying the digital camera along, each time we saw someone burning leaves, feeding monkeys, damaging a tree or even smoking in public. Being an environmentalist, one cannot really afford to miss interesting observations in one’s surroundings. And to be running an environmental portal for green news, events and activities in the city like the one you are reading this article on, doesn’t allow you to forgive yourself for missing out any interesting observation in the city which could have otherwise been shared for promoting the green cause.

All these years, smart phones have indeed proved smart enough for us and the best asset to carry around the city in all seasons. One can even demo and buy these phones online as best exemplified by the brand new Tata DOCOMO OneTouch Net Phone. The Delhi Greens Blog has used many of the images captured from mobile phones to bring to you a more authentic and real ‘picture’, worth many more than thousand words. The ‘Green Lens’ section on the blog has been highlighting, and is dedicated to images that speak for themselves, most of which have been taken through a smart phone camera. The Delhi Greens Blog has also been intereacting with a lot of other people who are all into bringing change in the society using smart technology as a phone camera.

A well-wisher and colleague recently informed that he has been exploring the use of smart phone camera for making short films on various social issues. The idea is is to utilise different and affordable gadgets and be able to equip the poor to come up with such documentaries on their surroundings. Technology is dynamic and the idea of low cost film making, for raising human rights issues of the urban poor could only have been possible because of it. Our well-wisher friend has so far been successful in bringing out two short films called Friendship and Homework with a group of 12 children from Push School,  Dhampur in Moradabad.

A very good example of smart people using smart phones can be seen on Facebook. Check out the Delhi Traffic Police (DTP) Page and you will see what we mean. Concerned citizens are uploading images of vehicles who have defaulted or violated traffic rules around the city. The DTP is responding with equal zest and has been responding to these alerts with thanks. Complaints and suggestions pouring in the page are usually accompanied by images taken from smart phones. The page has already crossed 34, 000 members who ‘Like’ it which is commendable for a Government Department.

Smart phones give option to people to act and live smart through good use of all the smart facilities they provide. The world no doubt can be a much smarter and better planet if we all become smart with these smart phones, by learning to use the technology for social and green good! So, what are you waiting for? Get, set and ‘click’ to Change the World!

Image from the Facebook page of Delhi Traffic Police

4 thoughts on “Phone Photography: Click to Change the World”

Views: 8,688
Share this ArticleLike this article? Email it to a friend!
Email sent!