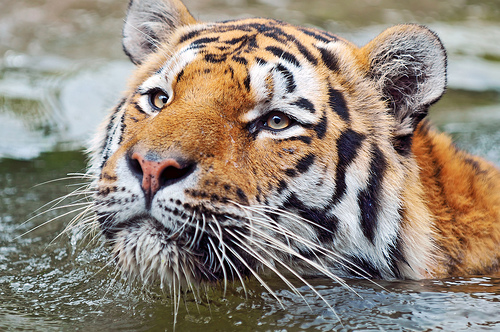 The 13 Tiger Range Countries (TRCc) viz. Bangladesh, Bhutan, Cambodia, China, India, Indonesia, Laos, Malaysia, Myanmar, Nepal, Russia, Thailand and Vietnam have finalized an ambitious global programme for restoring tiger populations in the wild.  Representatives from the 13 countries came together at the two day workshop on “Consensus for Conservation”, organized by the Ministry of Environment and Forests (MoEF) through the National Tiger Conservation Authority (NTCA) and co-hosted by the Global Tiger Initiative supported by Global Environment Facility (GEF), Smithsonian Institution, World Bank and other partners.

Environment Minister Jairam Ramesh congratulated the TRCs for finalizing Global Tiger Recovery Programme (GTRP) which is to be adopted by all the 13 TRC Governments, who will later meet at a first of its kind Tiger Summit in St. Petersburg, Russia in November this year. The Tiger Summit is said to be co-hosted by the Russian Prime Minister Putin and World Bank President Mr. Robert Zoellick. The Summit will begin a decade long process of range-wide recovery of the big cat, built on the implementation of national as well as trans-boundary actions to curb the illegal trade and demand for tiger parts.

On the Tiger Summit Mr. Ramesh said, “I welcome the consultative knowledge based process undertaken by GTI through Mr. Zoellick’s initiative which has brought all TRCs on a single platform of knowledge based action. I look forward to present the finalized GTRP at the upcoming Summit on behalf of TRCs. India is happy to share its expertise and work with the Bank on further enhancing the capacity of Indian wildlife institutions working with global leaders on this agenda”. The GTRP has emerged from a two-year long consultation process. The decade long experience of India and its expertise gained through Project Tiger has been a valuable input into the GTRP. Early actions to implement policy and institutional actions have already begun in TRCs.

On the poorly understood value of tiger landscapes, Mr. Ramesh said, “I would urge our economists and conservationists to come together and help develop a better understanding by all of us, including policy makers in other sectors, of the enormous value provided by the tiger landscapes.” According to Global Tiger Initiative (GTI), the GTRP has a high probability of success in saving the tiger because all 13 TRCs are working in concert, with a high level of political commitment to implement a comprehensive program which will be supported and closely monitored by the global conservation community. Mr. Keshav Varma, Program Director of GTI said that India with its Project Tiger Programme is now setting the stage for a global recovery of wild tigers and protection of the economic and bio diversity values of these habitats.

NTCA Member Secretary Rajesh Gopal noted the constructive action oriented dialogue that characterized the workshop and thanked GTI for championing the process which has empowered the TRCs and led to the GTRP and invited GTI to continue to provide similar support to TRCs to maintain the momentum during implementation. Hoping more attention towards the dwindling tiger population and real on the ground action for the big cat’s protection.

Image by Tambako via Flicr over Creative Commons

Views: 10,684
Share this ArticleLike this article? Email it to a friend!
Email sent!