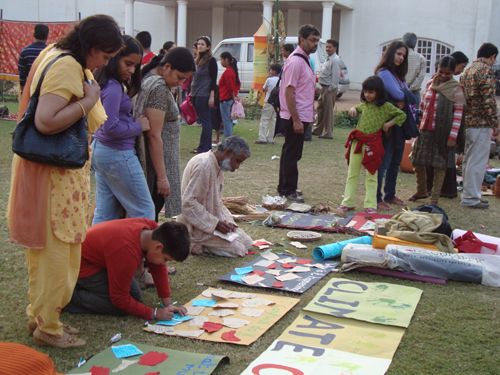 Vijay Jardhari – one among the youth – captured during Dastkar at Indira Gandhi National Center for the Arts, New Delhi

Vijay Jardhari of the Beej  Bajao Andolan from Uttarakhand, was one among the two individuals to be conferred with the Indira Gandhi Paryavaran Puraskar (IGPP) 2009, declared on 5th June, the World Environment Day 2012.

The IGPP Award was instituted in 1987 by the Ministry of Environment and Forests (MoEF), Government of India. This national level prize is named after the former Prime Minister of India late Smt. Indira Gandhi and is given each year to those individuals and organisations who have made significant contributions in the field of environment. It is the highest form of recognition for environmental protection work and is given to those who have made a measurable impact towards the protection/overall improvement of the environment. Any citizen of India or Indian organisation engaged in the Scientific Work/Field Work for the cause of protection of environment is eligible. There is no age limit for individuals.

Delhi Greens congratulates Vijay Jardhariji for receiving the IGPP award and for carrying out significant work towards the protection and promotion of ‘our common environment’. Delhi Greens’ Co-founder Aastha Kukreti had the pleasure of interviewing Shri Vijay Jardhariji and learn about the Beej Bachao Andolan and  the journey from the hills of Uttrakhand to the award ceremony of the MoEF. The interview was possible due to an invitation by Ajay Mahajan.

Aastha Kukreti: Heartiest congratulations from Delhi Greens and thank you for the opportunity to interact with you on the initiative you have taken for protect the environment.

Aastha Kukreti: What is the source of inspiration which drives you to work for environment ?

Vijay Jardhari : As is the case with any man/woman from the hills, I have always been associated with nature. The rapidly deteriorating status of farming in hilly regions across the Himalayas and the negligence and disrespect to local food especially in the Garhwal (Himalaya) region inspires me to work to promote and conserve the biological diversity of the region.

Aastha Kukreti: What activities have you taken up for safeguarding the environment ?

Vijay Jardhari : While participating in the Chipko movement, the love for trees and the Himalayan species of plants grew inside me throughout that period of time. After the Chipko movement, I was involved in protesting against mining activities in Nahi Kalan in Dehradun (Uttarakhand). After the success of these two andolans, I have been working to improve the condition of farmers in the hilly areas and have been working to promote the Himalayan biodiversity through the medium of ‘Beej Bajao Andolan‘.

Vijay Jardhari : The Beej Bachao Andolan or Save the Seeds Movement began in the late 1980s as a group of activists from the Henwal River Valley in Tehri district (Uttarakhand, India). The andolan aims to value traditional knowledge and wisdom and uphold and upkeep the Himalayan biodiversity (especially the local food plants), seek a respectable status for small farmers in the hilly regions and preserve the sociology of traditional agriculture, agricultural practices.

Aastha Kukreti : How did you connect with the people?

Vijay Jardhari : Earlier, when we first began the movement, people were not aware about the Himalayan biodiversity, its importance and the implications of losing this plant diversity. At the same time, there was no awareness or understanding of the importance of use of organic manure, natural farming, mixed cropping system and traditional agricultural practices. But once they were made aware about these practices through self-demonstrations, the support from the people was massive. Once people understood the need to protect and preserve local biodiversity of the area, it was easier to convince them to plant the local varieties and not ignore them.

Aastha Kukreti : What were the challenges you had to face while protecting the Himalayan biodiversity through this movement?

Vijay Jardhari : Negligence of the local varieties and lack of availability of local seeds was the major issue to handle in the Garhwal (Himalayan) region. Non-marketing of local seeds, food and integration of traditional agricultural practices with the modern equipments was also one of the major challenge that was faced. Motivating farmers to use  organic manure rather than using  pesticides and inspiring them to practice mixed cropping system in their agricultural practice was one of the key challenge that was faced. However, once they understood what was being said through results in their fields, it was not difficult to spread the message to other farmers.

Aastha Kukreti :What message would you like to give to our readers?

Vijay Jardhari : Environment belongs to all of us. One should work to promote and conserve the biodiversity of every region. Farmers – both big and small  should be recognized with full respect and dignity.

The interview was translated into English by the author. Image source

Views: 18,789
Share this ArticleLike this article? Email it to a friend!
Email sent!