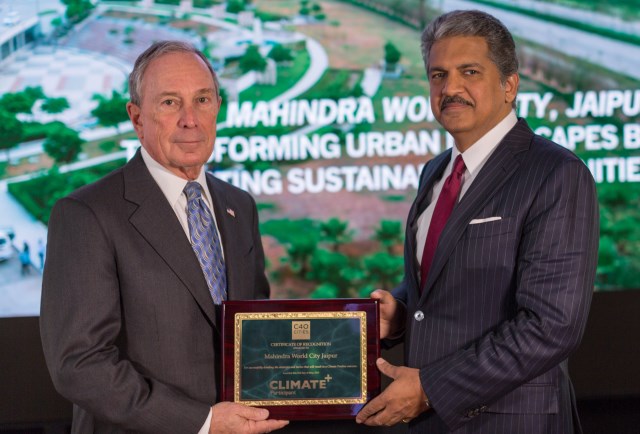 Mahindra World City Jaipur, one of India’s premier integrated business cities, has become the first project in Asia to receive Stage 2 Climate Positive Development certification from the C40 Cities Climate Leadership Group (C40). The Mahindra project, which is also the largest project in the world (by population) to reach this certification, is being recognized for its Climate Positive Roadmap detailing its plans and commitment to achieve a net-negative carbon emissions outcome.

The C40 Cities Climate Leadership Group, now in its 10th year, connects more than 75 of the world’s greatest cities, representing 500+ million people and one quarter of the global economy. Its Climate Positive Development Programme is a performance-based framework designed to create models for how cities can grow in low carbon ways.

Stage 2 Climate Positive recognition is given to those developers who have successfully created detailed plans for how they will reduce energy, waste and transportation related carbon emissions onsite and expand the impact to the surrounding community in order to achieve a Climate Positive outcome. In recognition of this milestone, President of the C40 Board and UN Secretary-General’s Special Envoy for Cities and Climate Change Michael R. Bloomberg presented a commemorative plaque to Anand Mahindra, Chairman, Mahindra Group at Bloomberg LP in New York City.

Anand Mahindra, Chairman, Mahindra Group, who received the prize stated, “Sustainability is an integral part of our ‘Rise’ philosophy and we are committed to driving sustainable practices across our businesses. My congratulations to Mahindra World City Jaipur for their pioneering work that has led to this global recognition. The C40 Cities Climate Leadership Group has contributed greatly towards implementing meaningful and sustainable policies and programmes that address the issue of global climate change. We as a Group are honoured to have received this certification.”

C40 Board President and UN Secretary-General’s Special Envoy for Cities and Climate Change Michael R. Bloomberg noted, “The partnership between the Mahindra Group and Jaipur is a great example of how cities can grow and provide opportunities for people without polluting the planet or worsening the risks we face from climate change.

It’s essential for cities to find ways to do that – including in India, where cities are growing rapidly and living standards are increasing, along with demands on energy and other resources. Innovative projects like this can help us avoid the worst impacts of climate change while also improving many people’s lives, and I applaud the Mahindra Group, C40, and the city of Jaipur for their leadership.”

The Climate Positive Development Programme (CPDP) was created to meet the pressing dual challenges of rapid urbanization and climate change. Part of the C40’s Sustainable Communities Initiative, the Programme was originally developed in partnership with the Clinton Climate Initiative and the U.S Green Building Council. It aims to create large-scale models and global good-practice examples of urban development that help mitigate climate change by reducing carbon emissions in an economically sustainable manner.

Views: 8,772
Share this ArticleLike this article? Email it to a friend!
Email sent!