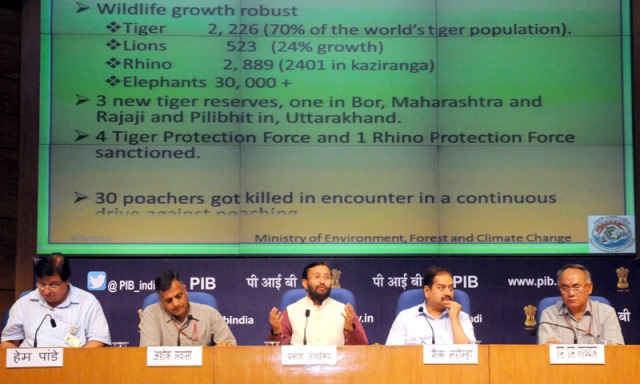 Environment Minister Shri Prakash Javadekar addressing a press conference to mark the completion of one year of the NDA government in New Delhi on June 08, 2015. Environment Secretary Shri Ashok Lavasa and other dignitaries are also seen.

The Environment Minister Shri Prakash Javadekar recently made a powerpoint presentation to highlight the achievements of the Government of India in the last one year in protecting the environment and wildlife of India. The Minister mentioned several pointers, achievements, proposals and plans which have been highlighted below.

On the face of it, it does seem that the present Government is trying its level best to protect and safeguard the environment and natural resources of India. However, it becomes the responsibility of each and every citizen to follow-up and constantly work with the Government to ensure the success of each such initiative as well as verify each achievement mentioned.

Following is the text of the Presentation:

I. Steps Towards Wildlife Preservation

These will ensure scientific waste management at all levels. The Notifications are open for consultations till 31st July 2015 and can be accessed on the MoEFCC website.

VII. Towards Clean Water and Rivers

VIII. Towards Enforcement and Implementation

XI. Steps Towards Revamping of Laws

Views: 3,013
Share this ArticleLike this article? Email it to a friend!
Email sent!