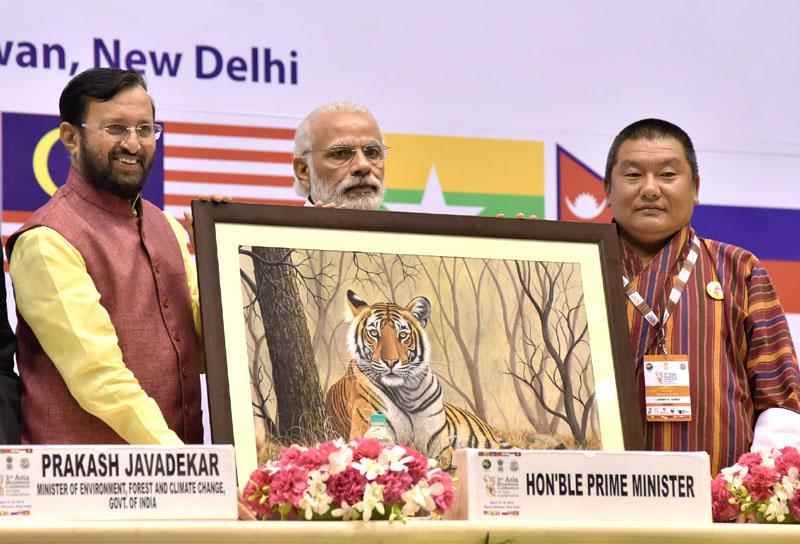 In his inaugural speech, the Prime Minister highlighted the importance of the tiger and mentioned how the tiger is an apex consumer in the ecological pyramid and food chain. “The tiger requires a large amount of prey, supported by good forests. Therefore, by protecting the tiger, we protect the entire ecosystem and the ecological services, which are equally crucial for the well-being of human beings.”

The PM also highlighted how the while the benefits from tiger conservation are enormous but they are also intangible. He also urged how neither is it possible to quantify the benefits provided by the tiger in economic terms nor should we make such an attempt. “Since Mother Nature has bestowed the tigers for its own conservation, it becomes our bounden duty to conserve them,” the PM noted.

Speaking on how the tiger is much more than just a wild animal in India, the PM noted, “In our mythology, the mother Goddess, who is the embodiment of Mother Nature, is depicted sitting on a tiger. In fact, most of our Gods and Goddesses are associated with some animal, tree or river. In fact sometimes these animals are put on the same pedestal as Gods and Goddesses. No wonder the Tiger is also our national animal.”

The Prime Minister also emphasize the role of forests and echoed the words of Gautam Budha, “the forest is a peculiar organism of unlimited kindness. It affords protection to all beings, offering shade even to the axe-man who destroys it.”

The PM also expressed his concern over the reducing tiger habitats across Tiger Range Countries. The situation has been aggravated further by the ongoing trafficking in body parts and derivatives of this magnificent animal. The Prime Minster highlighted how working to protect the tiger is therefore the need of the hour especially since a viable tiger population undoubtedly symbolises a mitigation strategy for climate change as well.

The Prime Minister also mentioned Government of India’s role in tiger conservation, which began largely with the setting up of Project Tiger in 1973. The coverage of Project Tiger has increased considerably from the initial 9 tiger reserves to 49 at present. Project Tiger is a joint effort of the Centre and the State and due to such collective efforts, there has been a rise of thirty per cent in the number of tigers in India. It has gone up from 1,706 in 2010 to 2,226 in 2014.

The PM also highlighted some landmark initiatives being taken up by India’s National Tiger Conservation Authority (NTCA). These include

The Prime Minister also added how, this year, funds allocated for tiger conservation have been doubled from Rupees 185 crores to Rupees 380 crores.

The Prime Minister concluded his inaugural speech by stating, “I would like to emphasise that conservation of tigers is not a choice. It is an imperative. India is committed to engage with all Tiger Range Countries for this purpose.”

The Environment Minister Shri Prakash Javadekar also addressed the gathering and strongly emphasized that India has ‘Zero Tolerance’ against wildlife crimes such as poaching.  He said that the recent case of poisoning of tigers in Pench Tiger Reserve is unacceptable and that all the culprits have been arrested and will be severely punished. “We lead by example and are committed to cooperate with other Tiger countries”, the Environment Minister declared.

Views: 3,305
Share this ArticleLike this article? Email it to a friend!
Email sent!