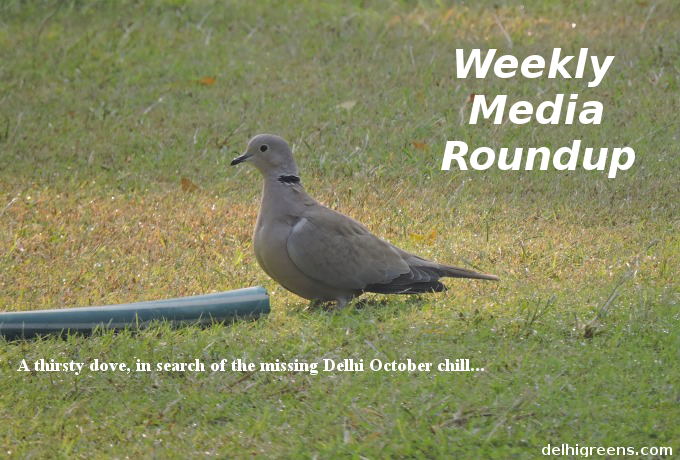 Weekly green news update from across different media networks for week 42 (between October 17 to 23) 2016.

1. Delhi May Solve Its Air Pollution Problem With ‘Vertical Gardens’

In a city with some of the world’s most poisonous air, a lack of space for greenery makes an alarming problem only worse for many of Delhi’s 10 million residents.

The National Zoological Park, which has been shut down temporarily amid a bird flu scare, today reported fresh pelican deaths.

Aiming at steps to curb pollution, the National Green Tribunal has directed Delhi government to reduce traffic congestion on city roads and introduce destination buses to improve air quality in the national capital.

The Vigilance Department of South Corporation found massive irregularities by one of the concessionaires engaged in waste management by the civic body.

A day after being rapped by the Supreme Court for not doing enough to dispose of the huge quantity of garbage in the national capital, the Delhi government today formed a three-member committee which will submit a report on solid waste management by November 10.

Industries and power plants in and around Delhi are the biggest source of pollutants, SO2 and NOx, that cause breathing ailments in the city.

The National Green Tribunal asked authorities in the national capital on Tuesday to find a solution to growing air pollution in the city, considering a report that the odd-even road rationing formula tested this April had little impact.

Even though the national capital continues to choke on smog and dust, experts say its air quality this October has improved a little, as compared to last year.

9. Delhi to Get A New Waste-To-Energy Plant

North Delhi will soon get another waste-to-energy plant in Bhalaswa site that will ramp up the rate of processing of solid waste tremendously, the area’s civic body said on Monday.

“People are dying” due to lack of proper disposal of waste, the Supreme Court said on Monday as it expressed concern over garbage dumped at landfill sites in the national capital.

A “flood” of multi-storeyed buildings have been constructed on the flood banks of Ganga and Yamuna over the years without devising any mechanism for waste disposal, the Uttar Pradesh Pollution Control Board told the National Green Tribunal today.

The Indian capital, laboring under the label of being the world’s most polluted city, is trying something new to help clean up its air.

The Ganga rejuvenation project, which is of national importance, is being carried out by officials “who do not know” how many drains are polluting the river, the National Green Tribunal lamented on Wednesday.

Views: 4,530
Share this ArticleLike this article? Email it to a friend!
Email sent!