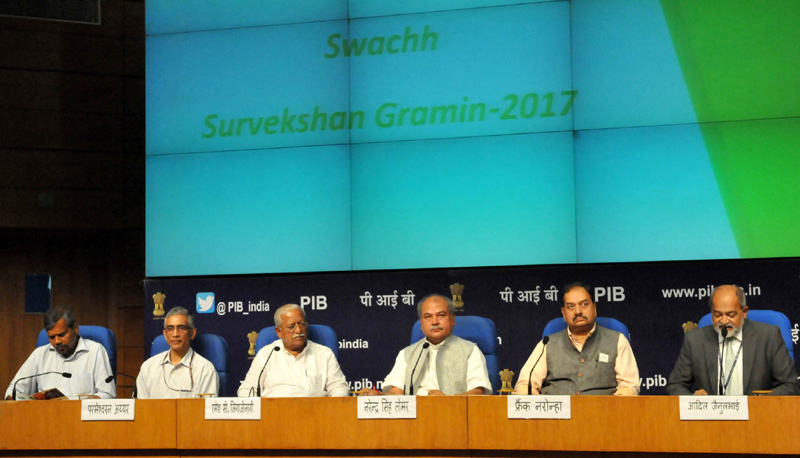 As the Swachh Bharat Mission approaches the third anniversary of its launch by the Prime Minister, Shri Narendra Modi, the Ministry of Drinking Water and Sanitation has launched a third party verification survey report to take stock of the progress already made by the Mission in rural India. The Quality Council of India (QCI) has conducted a transparent third-party assessment of the present status of rural sanitation in all States and UTs, called Swachh Survekshan Gramin 2017.

Under the Swachh Survekshan Gramin 2017, QCI surveyed 1.4 lakh rural households across 4,626 villages and found the overall toilet coverage to be 62.45%. At the time of the survey, i.e. May-June 2017, the Swachh Bharat Mission (Gramin) MIS reported the coverage to be 63.73%. The survey also observed that 91.29% of the people having access to a toilet, use it. Further, in response to the Prime Minister’s call to the nation to Quit Filth, it was announced by Shri Tomar that the Swachh Bharat Mission (Gramin) will celebrate the week leading up to the 70th Independence Day as Khule Mein Shauch Se Azaadi saptaah.

Views: 3,134
Share this ArticleLike this article? Email it to a friend!
Email sent!