Top 8 Reasons Why You Should Not Burst Crackers This Diwali 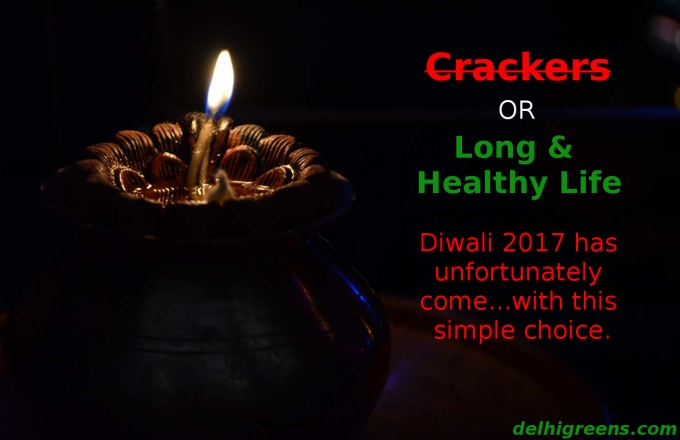 The festive season has commenced and celebrations are in full swing. From Durga Puja to Dussehra to Diwali, everyone can be seen reveling in the festive mood. Diwali, a festival marking the victory or good over evil, is a major Indian festival celebrated with great amount of zest and zeal across the country. People coming from different walks of life, leave no stone unturned in decorations and preparations for the festival.

However, since the past few years, the purpose of the festival has shifted focus from being an occasion of enjoyment and bonding to one of lavish-spending and a mark of one’s societal status. Families these days spend exorbitant sums of money on firecrackers and fireworks. This may bring a few seconds of joy for some, but also brings permanent damage to the lungs and health of all.

It is time we not only lighten our homes but also enlighten our minds with the true meaning of Diwali by promoting a sense of sympathy towards the environment and towards our own health. The first step in this direction is to stop bursting firecrackers and contributing to the already elevated pollution of Delhi. And if you still don’t think this is important, here are eight reasons why you should certainly not burst crackers this Diwali.

Delhi, considered amongst the world’s most polluted cities, suffers from a worsened air quality during Diwali owing to the bursting of crackers. The pollution level increase drastically due to brazen bursting of crackers. Clean the Air for Children – a Report released by United Nations Children’s Fund – states that children residing in India are at a much higher risk of developing life-threatening chronic ailments due to aggravating air pollution levels. All sections of the society are badly affected by air pollution during and post-Diwali. Being the most vulnerable, older people and children face the worst consequences of the deteriorated air quality during Diwali. Diwali is followed by the winter season, in which there is a formation of a thick blanket of smog, with 2016 being the worst for Delhi so far.

It is not just a pollution-free Diwali that should be promoted, but it is equally important to promote a decibels-free Diwali. The Central Pollution Control Board (CPCB) analyses noise pollution at several locations every year during Diwali and recorded excessive levels of noise pollution due to modern crackers with louder noise in recent years. According to Experts, noise level beyond 120 decibels can cause a nervous breakdown and mental health disorders. Pregnant women suffer from stress and lack of rest due to loud noises. Moreover, innocent animals that are incapable of expressing discomfort, suffer the wrath of this noise pollution as they cannot bear excessive noise and lightening and hide in corners. How can a festival bring such discomfort to people and animals, and we should rethink about this heartless practice of bursting crackers.

3. Generates Waste Beyond Our Handling Capacity

All the three landfills in Delhi, viz. at Ghazipur, Bhalswa and Okhla lack authorization from Delhi Pollution Control Committee (DPCC). They have a collective capacity of 4,600 MTD. However, Delhi produces a whopping 8,500 MTD of waste, which is nearly twice the capacity of Delhi’s landfill sites. These sites are hence being operated beyond their saturation point. This ignorant attitude of the authorities recently led to a disastrous landslide at the Ghazipur site, claiming two lives. The waste generated due to outer casing of the firecrackers adds to the already grim situation of waste disposal in Delhi. Moreover, the toxic chemicals present in them seep into the soil and lead to land degradation. Diwali celebrations thus call for a thoughtful approach this year.

Diwali, the festival of lights, is celebrated to mark the return of Lord Rama to his hometown Ayodhya after 14 years of exile. The people of Ayodhya celebrated the occasion by lighting diyas (oil lamps) and distributing sweets. There is no mention of bursting crackers in Ramayana or any other scripture as a mark of Diwali celebration. Furthermore, the gun powder used in crackers is a Chinese invention. While ancient Indians might have had the knowledge about gun powder, its use in celebrations and festivals was never encouraged due to our culture’s firm belief in peace and discouragement of practices harmful for the environment. So bursting crackers has never been a part of our tradition and culture and should not be carried out in the name of religion. In fact, bursting crackers is actually against the practice of Indian culture.

5. Promotes Chinese Products that Need to be Banned

The crackers and other products you buy during Diwali are mostly made in China. There are large number of crackers and other items that are flooded in the Indian markets by Chinese companies around Diwali. In addition, according to many media reports, firecrackers worth Rs. 1,500 crore are imported illegally from China every year, using false documents. These consignments are falsely imported by declaring them as medical equipment for physically disabled, bicycle parts etc. These firecrackers are also often reported in the media to be of toxic nature since they are anyways illegal. The toxic chemicals in these firecrackers reach our lungs and stay there and cause various lung disorders.

We must therefore stop destroying our health due to these Chinese crackers (sometimes sold as fake Make in India stickers) and also STOP supporting and boosting the Chinese Economy. The recent India-China standoff, where Chinese soldiers tried to enter our borders and were stopped by our soldiers is a stark reminder that we should stop purchasing all Chinese goods, especially these harmful crackers. Let us thus use this opportunity to standby our brave soldiers.

Every year, during the month of October, farmers from the neighbouring states of Punjab and Haryana set ablaze their farms to burn the crop residue left after harvesting paddy, wheat and other crops. Plumes of smoke travel to Delhi from these regions due to westerly winds, forming a thick blanket of blinding smog. This not only causes respiratory illnesses, but also adversely affects the brain, eyes and even the nervous system. All of you must be remembering the winter of 2016 when our eyes were burning just by being outside in the open. This year, Diwali falls on October 19 whereas the burning of waste straw will commence from October 12. It is thus upon us to realize the havoc and irreparable damages that bursting of firecrackers will cause to us.

Employing children into the fireworks industry is a harsh reality that has existed for decades in India and many other countries and continues to do so, even after the formation of laws banning child labour. The small and flexible fingers of children make them an easy prey as labourers for making firecrackers. Children are subjected to extremely hazardous conditions of work including direct exposure to sulphur and gunpowder. In the absence of safety or protection and inhuman work environment, they suffer from declining mental health, lung infections, scaling of skin etc. Last year, in Sivakasi (Tamil Nadu) – infamous for rampant child labour abuse, a fire broke out in a firecracker godown, claiming several lives. Such incidents become recurring news around Diwali. Boycotting crackers will have an indirect, albeit significant impact on the child labour abuse still prevalent in India.

Fire accidents increase manifolds during festive season, owing to excessive use of firecrackers by people. These contain explosives and harmful chemicals so dangerous that no amount of precautions or safety can prevent the damage. Illegally produced firecrackers may have improper functioning that sometimes causes lethal injuries. The most common injuries caused include burns due to clothes catching fire, damage to the eyes etc. Every year, when we celebrate Diwali, the firemen and fire stations around us work through the night as they keep getting reports of fire all around. The best way to avoid such accidents is to completely abandon bursting crackers.

I hope the above makes it clear to you that bursting crackers is nothing but a sheer wastage of one’s hard-earned money. Not only does it hampers your health, it also pollutes our environment, causing irreparable damage. A more productive and fulfilling way of celebrating Diwali this year would be to use the same money for charity. While one doesn’t need a special occasion to serve the society, festivals like Diwali give a new meaning to reveling and bring happiness in the lives of the lesser privileged. From donating blankets, distributing food to planting trees, there are innumerable ways to make Diwali peaceful and an occasion of merrymaking for everyone.

Views: 47,033
Share this ArticleLike this article? Email it to a friend!
Email sent!