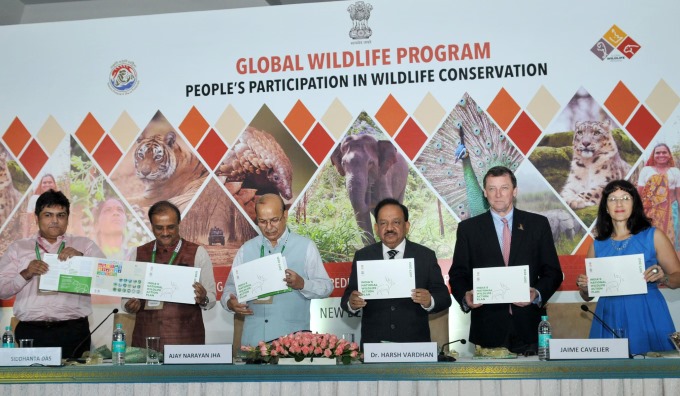 The Environment Minister of India Dr. Harsh Vardhan inaugurated the Global Wildlife Programme Conference at Hotel Ashok in New Delhi on 2nd October 2017. He appealed to the fraternity of wildlife experts and scientists to deliberate on various wildlife-related laws with a modern and scientific outlook. “If you can blend science and technology to the cause of wildlife, it will produce a drastic difference to the outcome of the Conference,” he said.

Dr. Harsh Vardhan also emphasised that modern technology must be used to counter poachers and wildlife crimes. The Minister informed that India has the largest participation of people living in the forests towards conservation efforts. Two documents: 1) India’s National Wildlife Action Plan (NWAP) 2017-2031 and 2) Secure Himalaya were released on the occasion. Referring to the National Wildlife Action Plan, Dr. Harsh Vardhan said that the NWAP has been made landscape-based, rather than sanctuary, or national park-based.

The NWAP 2017-2031 focuses on preservation of genetic diversity and sustainable development. The NWAP has five components, 17 themes, 103 conservation actions and 250 projects. The five components are: 1) strengthening and promoting the integrated management of wildlife and their habitats; 2) adaptation to climate change and promoting integrated sustainable management of aquatic biodiversity in India; 3) promoting ecotourism, nature education and participatory management; 4) strengthening wildlife research and monitoring of development of human resources in wildlife conservation and 5) enabling policies and resources for conservation of wildlife in India. NWAP 2017-2031 is hoped to help to mainstream wildlife conservation in development planning processes. The Minister also launched the India Wildlife Mobile App to mark the occasion.

Addressing the gathering, Secretary, Ministry of Environment Forest and Climate Change, Shri Ajay Narayan Jha pointed out that the Conference will provide a platform to build strategic partnerships between all the 19 nations and enable India to strengthen its enforcement mechanism to control wildlife trafficking. Shri Jha also said that the nations will learn from each other on strengthening peoples’ participation. The Environment Secretary emphasised that some new action issues have been considered in the Third National Wildlife Action Plan. These issues include climate change and wildlife, wildlife health, inland, coastal and marine conservation and wildlife conflict mitigation.

Since 2nd October is also the beginning of the Wildlife Week in India, the National Zoological Park of the MoEFCC also celebrated Gandhi Jayanti and Wildlife Week 2017 which saw participation from around three hundred students from various schools of National Capital Region.

Views: 5,269
Share this ArticleLike this article? Email it to a friend!
Email sent!