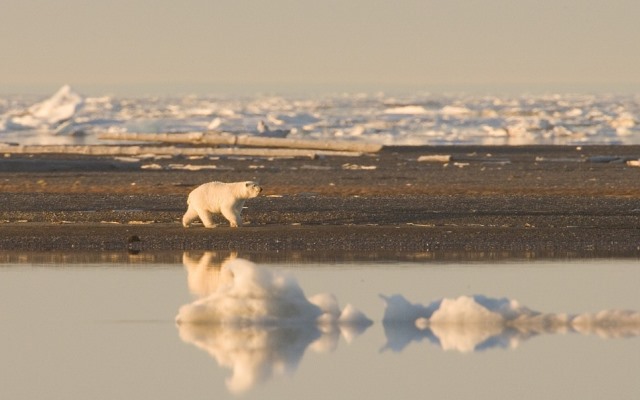 When the last tree is cut, the last river poisoned, the last fish eaten; when to breathe air is sickening, you will realize, too late, that wealth is not in bank accounts and that you cannot eat money.

It seems world leaders today really need to read and reread the above prophecy till they understand it enough to stop agreeing to, and calling the Arctic an arena of global power and competition.

2019 has witnessed global temperatures breaking previous records and glaciers bleeding water. School students striking for climate and the world sighing over the heart wrenching viral revelations of bony, emaciated starving polar bears who couldn’t get seals to feed themselves are some other recent happenings of this year.

However, at a time when unprecedented ice sheet collapses were becoming the new normal, when scientists were already releasing prior obituary of 1 million species on the verge of  extinction, Mike Pompeo, the Secretary of State of USA was addressing a meeting of the Arctic Council at Rovaniemi in Finland and saying, “Steady reductions in sea ice are opening new passageways and new opportunities for trade. This could potentially slash the time it takes to travel between Asia and the West by as much as twenty days…” .

The statements made by Mike Pompeo in the assembly of officials from 8 nations surprised nobody! His stand in the forum was simply an indication of the West waking up to Russia’s increased presence and aggression in the Arctic Circle. With increased accessibility of navigation in the Arctic due to rising temperatures, the dog-eat-dog race for territorial claims, resource exploitation and drills is on its apogee.

Countries like China are also joining in for ambitious and heavily invested projects like the Polar Silk Road. Fishing in the Arctic zone is banned only for 16 years and thus, nations like Norway, Russia, China, USA are just waiting to pounce over as soon as the Arctic Treaty lapses. It is very surprising that when the world on the verge of a crisis, there are people who still choose to be greedy and imbecile.

It is tremendously unwise to think that things can go on the way they have been in the past and we have time for that judgement day even following the projections and predictions. This decade has seen many unprecedented disasters and phenomenon which were much fiercer than they were anticipated. So, do you still think all the ice is gradually melting day by day?

What say about the mass melting of Greenland this June, when it lost 2 billion tons of ice in a single day! This was highly unusual, as the major loss of ice sheets generally occurs in July and it is horrifying to imagine what other surprises climate change has in reserve for us.

Polar bears today are in the most pathetic condition they have ever been. Pregnant polar bears are having a hard time searching for dens where they can give birth to their cubs. With the declining of life-sustaining sea ice needed for hunting, resting and breeding in all 19 regions of the Arctic inhabited by the species, they are vulnerable to mass extirpation.

Another study reveals that climate change has brought grizzles, black bears and polar bears together and this is not so friendly. These species are part of three different dynamic ecosystems – forest, tundra and ocean. However, the need for food has caused their overlap in Wapusk National Park on the west coast of Hudson Bay in northern Manitoba. This can be precarious for both polar and black bears as grizzles tend to dominate and pry on both of the species.

But we are not polar bears, right? We are smart and intelligent enough to have back-up plans when we run out of food. We have gene banks, seed banks all over the world and even if disasters, earthquakes, volcanic eruptions, warfare, political strife etc. ruin them all, and I dare say we suffer from mega droughts or massive crop failures or the return of dust bowls, we still have backup of the backups, the Global Seed Vault of Svalbard archipelago, popular as, doom’s day seed vault dug deep (393.7 feet) in rock in the cold Norwegian climate.

So, we are never going to be famished like those denizens of the poles we saw in those videos, isn’t it? Well, please panic! It’s ironic but the Svalbard Global Seed vault might end even before life ends on the planet. This world’s biggest collection of agriculture biodiversity is now struggling to survive with the climate getting warmer and
wetter. Already, record temperatures and heavy rainfall caused melt-water to reach the vault’s tunnel. Fortunately, the water did not reach the seeds. But is it possible to be lucky always? Moreover, there are seeds and plants on the verge of extinction which cannot be preserved in the vault and they are the most threatened!

It is unfortunate, shocking and a shame that all the alarm bells and their continuous sharp clairvoyant zizzes have been turned a deaf year to, by the ones who are entrusted by the world to hear, act and lead us on it. Maybe, it is  time we stop expecting and entrusting them, maybe we need a furious clarion, loud enough to actually deafen them and take the reins ourselves. And if we fail to do so, maybe the only alternative left for us would be to wait for Noah’s Ark to save us!

Views: 2,821
Share this ArticleLike this article? Email it to a friend!
Email sent!