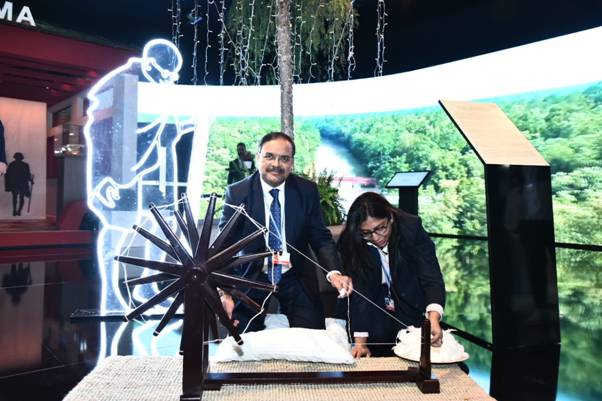 The United Nations Framework Convention on Climate Change (UNFCCC) was adopted in the year 1992. Since then, Parties to the Convention have met at least once a year to further its implementation. This year, the 25th Conference of the Parties to the UNFCCC – COP 25 – is taking place in Madrid, Spain (under the Presidency of Chile) from 2-13 December 2019.

The India Pavilion at COP 25 was inaugurated by the MoEFCC Secretary Shri C.K. Mishra and is themed on celebrating 150 years of the birth anniversary of Father of the Nation, Mahatma Gandhi. The life and messages of Mahatma Gandhi on sustainable living are aptly depicted at the India Pavilion. It also features the humble Charkha, which is the physical embodiment of Gandhian principles of perseverance, self-sufficiency and sustainability.

India’s recent efforts towards adapting to changing climate include:

India’s (NDC) under the Paris Agreement: A Recap

Under the Paris Agreement, India had submitted the following Nationally Determined Contributions (NDC):

Overall, India looks forward to engaging in negotiations with a constructive and positive outlook and work towards protecting its long-term development interests.

One thought on “COPing with Climate Change: India and Gandhi at COP 25 in Madrid”

Views: 2,408
Share this ArticleLike this article? Email it to a friend!
Email sent!