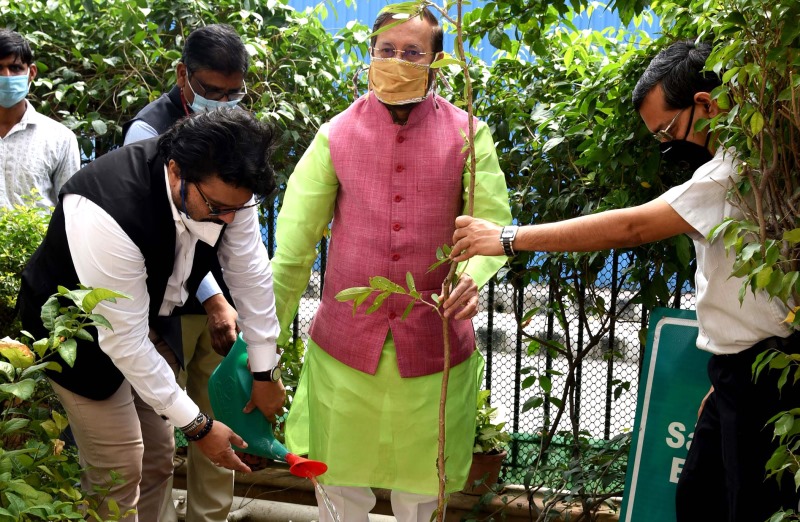 Environment Minister Prakash Javadekar planted a sapling during the virtual celebration of the World Environment Day in New Delhi on 5 June 2020. The focus of WED celebrations this year was Nagar Van (Urban Forest) and the theme of this year’s WED is Biodiversity. Minister of State for Environment, Forest and Climate Change Babul Supriyo and Secretary, Ministry of Environment, Forest and Climate Change R.P. Gupta also joined in the plantation.

Due to the ongoing Coronavirus pandemic, the World Environment Day this year was observed virtually over the Internet. The Environment Ministry announced implementation of the Nagar Van scheme which will develop 200 Urban Forests across the country in next five years. This will be done with renewed focus on peoples participation and collaboration between Forest Department, Municipal bodies, NGOs and corporates. A brochure on Best Practices in Urban Forests was also released during the event.

Stressing on  this year’s theme Time for Nature, with special focus on Biodiversity, the Environment Minister said, “thumb rule is that if we protect Nature, Nature protects us.”

Highlighting the Indian culture, Prakash Javadekar mentioned how India is probably the only country where trees are worshiped, where animals, birds and reptiles are worshiped and this is the respect Indian society places for environment. Speaking on the Nagar Van Scheme, he said, “we had a very important tradition of village forest since ages, now this new scheme of urban forest will fill up the gap because urban areas have gardens but very rarely forests. With this activity of creating urban forest we will also create additional carbon sink.”

Through a separate platform, Home Minister Amit Shah also stressed on the rich Indian culture and highlighted that from times immemorial, India has rich tradition and deep knowledge about nature conservation. In his message on the occasion he mentioned how different ways of worshiping and preserving the environment are intrinsic to our culture.

The MoEFCC event also saw virtual participation from Executive Director of the United Nation Convention to Combat Desertification (UNCCD) Ibrahim Thiaw and Executive Director of United Nation Environment Programme (UNEP) Inger Andersen. Mr. Thaw stated, “We need nature more than nature needs us, if at all. Is it not time, that we have the humility to rethink and redefine our relationship with nature. Perhaps, it is time for humanity to have a new social contract for nature.”

Biodiversity conservation has traditionally been considered confined to remote forest areas but with increasing urbanisation a need has arisen to safeguard and save biodiversity in urban areas as well. Urban Ecology has been the longest ignored subject in the field of Environmental Studies. Urban forest is the best way to bridge this gap. The Environment Ministry is therefore certainly on the right track as far as adopting the Nagar Van Scheme is concerned. It will certainly help conserve urban biodiversity and optimise urban landscapes.

Views: 2,127
Share this ArticleLike this article? Email it to a friend!
Email sent!