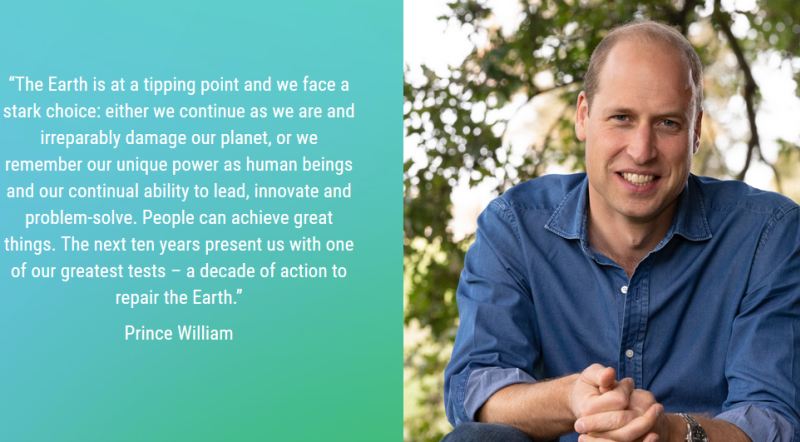 Delhi Greens has been named an official Nominator for The Earthshot Prize launched by Prince William on 8 October, 2020. The Earthshot Prize is the most prestigious global environment prize in history, incentivizing worldwide change with a decade of action to repair our planet.

Delhi Greens has been working to protect and preserve our common environment since 2007. Generating environmental awareness among the masses and encouraging and empowering the youth to take green action has been the key focus of the organisation. Delhi Greens strives to promote conservation of local, regional and global environment and sustainable development.

As an organisation which shares values and ambitions with the ground-breaking Earthshot Prize initiative, Delhi Greens is extremely excited to announce that we are an Official Nominator for this initiative. The Earthshot Prize will support global effort to protect and restore the environment while also turning the current pessimism surrounding environmental issues into optimism, highlighting the ability of human ingenuity to bring about change.

Taking inspiration from President John F. Kennedy’s Moonshot, which united millions of people around an organising goal to put man on the moon, The Prize is centred around five Earthshots. Each is a simple but ambitious goal for our planet, which if achieved by 2030 will improve life for us all, and for generations to come.

1. Protect and Restore Nature
To ensure that for the first time in human history, the natural world is growing – and not shrinking – on our planet.

2. Clean our Air
To ensure that everyone in the world breathes clean, healthy air – at WHO standard or better.

3. Revive our Oceans
To repair and preserve our oceans for future generations.

4. Build a Waste-Free World
To build a world where nothing goes to waste, where the leftovers of one process become the raw materials of the next – just like they do in nature.

5. Fix our Climate
To fix the World’s climate by cutting out carbon: building a carbon-neutral economy that lets every culture, community and country thrive.

Together, the five Earthshots form a unique set of challenges rooted in science, which aim to generate new ways of thinking, as well as new technologies, systems, policies and solutions. By bringing these five critical issues together, The Earthshot Prize recognises the inter-connectivity between environmental challenges and the urgent need to tackle them together.

Every year from 2021 until 2030, Prince William, alongside The Earthshot Prize Council, will award The Earthshot Prize to five winners, one per Earthshot, whose evidence-based solutions make the most progress towards these goals. Five, one million-pound prizes will be awarded each year for the next 10 years, providing at least 50 solutions to the world’s greatest environmental problems by 2030.

The Earthshot Prize aims to find new solutions that work on every level, have a positive effect on environmental change and improve living standards globally, particularly for communities who are most at risk from climate change.

Prizes could be awarded to a wide range of individuals, teams or collaborations – scientists, activists, economists, community projects, leaders, governments, banks, businesses, cities, and countries – anyone whose evidence-based solutions makes a substantial contribution to achieving the Earthshots.

The nominations process will open at the start of November 2020. Interested individuals and organisations can get in touch with us on our email: contact(at)delhigreens(dot)org

Views: 1,490
Share this ArticleLike this article? Email it to a friend!
Email sent!