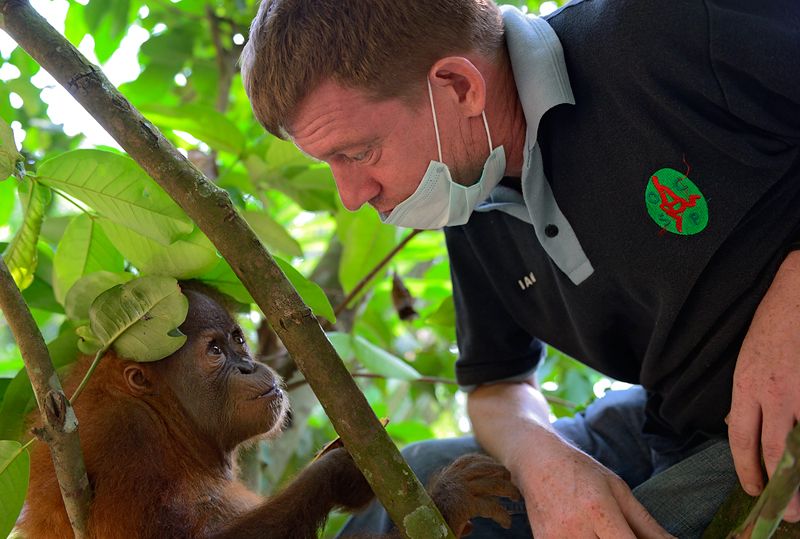 Renowned British orangutan conservationist Dr. Ian Singleton has been awarded an OBE (Officer of the Most Excellent Order of the British Empire) by Her Majesty the Queen for Services to the Environment and Conservation. The announcement of the Queen’s Birthday Honours list usually takes place in June, but has been delayed this year due to CoVID 19 pandemic.

Only around 13,400 Sumatran orangutans and less than 800 Tapanuli orangutans remain in the wild today. All three orangutan species are listed as Critically Endangered by the International Union for the Conservation of Nature and Natural Resources (IUCN). In 2001, Dr Singleton founded the Sumatran Orangutan Conservation Programme (SOCP) working for the Swiss-based PanEco Foundation, alongside its Indonesian partner NGO the Sustainable Ecosystem Foundation (Yayasan Ekosistem Lestari; YEL) and the Indonesian Ministry of Environment and Forestry’s Directorate General for the Conservation of Natural Resources and Ecosystems (Ditjen KSDAE).

Dr. Singleton began his career with orangutans even before that, in 1989, working for another OBE recipient, Gerald Durrell, at his world-renowned Jersey Zoo in the British Channel Islands. He left Jersey in 1996 to study wild orangutans in Sumatra for his Ph.D, with the Durrell Institute of Conservation and Ecology at the University of Kent, and after completing his thesis in 2000, headed back to Sumatra immediately to establish the SOCP and help protect and conserve wild orangutans and their habitat. He was also one of a team of scientists who described to the world (in 2017) a new species of orangutan, the Tapanuli orangutan, named after the region where it occurs.

“Ian was an exceptional keeper during his time with Gerry and me at the Jersey Zoo, but it was always obvious that he wanted to do more. It’s been extremely rewarding to watch him grow since then into what he is today, one of the most well rounded and effective conservationists for some of the planet’s most threatened species and habitats, taking on some of the biggest issues of our time,” noted Dr. Lee Durrell, MBE, widow of Gerald Durrell, OBE.

According to Dr. Singleton, the value of the new wild populations of Orangutans has never been so apparent. He also believes the scientific consensus that orangutans are likely to be susceptible to infection by the SARS-CoV-2 virus that causes CoVID-19 in humans. This makes it even more important for us to keep all of the orangutans well, especially when we remember just how few of them there are left.

“We need to protect the remaining wild populations of both the Sumatran orangutan (Pongo abelii), today numbering only around 13,400 individuals, and their last real stronghold, the Leuser Ecosystem, and the fewer than 800 Tapanuli orangutans (Pongo tapanuliensis) that remain in their only habitat, the Batang Toru Ecosystem in North Sumatra. Both species are listed as Critically Endangered on the IUCN Red List of Threatened Species, and the Tapanuli orangutan is the most endangered great ape species in the world!” Dr Singleton warns.

Views: 1,737
Share this ArticleLike this article? Email it to a friend!
Email sent!