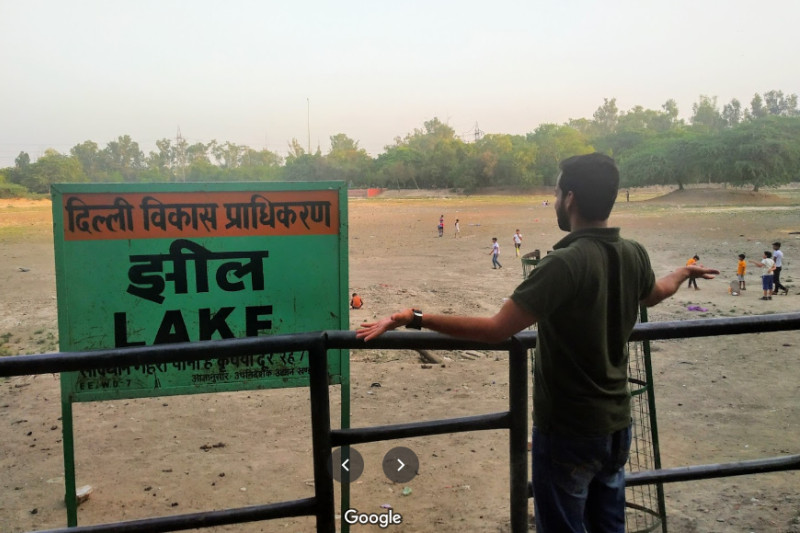 The Tihar Jheel existed till late 2011-2012 as a body of water, a wetland with islands and considerable biodiversity. Its disappearance led to the decline in the groundwater level in the neighbouring areas. The signs of trouble for the Tihar Jheel began as early as 2005 when groundwater in the area began declining at an alarming rate. An old well of about 100 feet depth in my ancestral home in this area became one of the many victims of this decline.

There are many reasons behind the disappearance of this wetland. A prominent one among them deals with increasing population in the vicinity of the Tihar Lake area. This was facilitated, to a great extent, by changing governmental policies that now permit high rise construction and residential structures beyond the second floor. This policy change came as a death warrant for the Tihar Lake. The factors that led to this change included greater space requirement of expanding family-sizes and also rising cost of land in Delhi. The construction and building mafia also played a role to further their business interests.

The adjoining DDA Sports Complex of Hari Nagar also played its part in the disappearance of the Tihar Jheel. The Sports Complex was forever besieged with water demands. To meet this demand, groundwater was dug out by powerful bore wells to depths beyond 200 feet. The entire water table, which must have been replenishing the lake and also benefiting from the lake, was completely depleted by around 2012.

The present depth of functional bore wells that harness fresh, potable groundwater in and around the Tihar Jheel lake are all 300 feet and beyond. This water tapping with impunity, and often unauthorised government supervision sank the water table beyond recovery. And now it is evident that government authorities are well aware that reversing this damage or revival is totally out of the question.

I feel, there are some points of consideration in this regard, that we need to keep in mind for sustaining urban development in this area.

1) Demographic population planning: As per the 2021 Master Plan of Delhi, the flaw lies in Delhi Development Authority permitting high rise buildings without considering the presence of a wetland in the vicinity. This is resulting in the clustering of population in a specific region which is draining the natural resources. There is poor and delayed infrastructure development of regions around Delhi, which is resulting in population explosion of Delhi.

2) Ease of unauthorized bore-well drilling: This factor along with poor distribution of potable water by the government and municipal agencies is also forcing individuals to sink bore-wells using readily available cheap labour in Delhi.

3) Lack of awareness of the need for water conservation.

Also, an important thing to keep in mind is the water crisis that is looming overhead like a dragon and warnings of catastrophic future ahead. The NITI Aayog report on Water Management Index says that India is suffering from the worst water crisis in its history, and sadly is ranked 120 among 122 countries in Global Water Quality Index. And it is predicted that many cities will soon face “Day Zero” (term that got popular in Cape Town in South Africa, meaning turning off the cities taps for a day) like situation.

The government is making promises that the situation will not reach alarming levels but who will ‘walk the talk ‘is still to be seen. A mass movement to create water recharging and rainwater harvesting in every house before monsoon, every year , is a focus of the government, but it’s still far from becoming a reality.

According to statistics there are more tube-wells in Punjab than farmers. And there is rampant over extraction of ground water in all states of India. The policymakers, the politicians, the farmers are failing to understand the urgency of implementation of concrete steps in tackling the water crisis. Solution like Jal Shakti via salt water is one of the remedy and India’s massive coastline offers hope, following the example of Israel where desalination of sea water has been successful.

There is some hope for Tihar Lake too as the South Delhi Municipal Corporation (SDMC) has begun work to clean water bodies in other parts of the city such as Aya Nagar in South-west Delhi, but after a nine year long struggle by the residents. There is news of more such projects that have been planned in Delhi. I sincerely hope that the Tihar Jheel is also considered for restoration on an urgent basis.

3 thoughts on “Eyewitness Insight into the Disappearing Tihar Jheel”

Views: 3,492
Share this ArticleLike this article? Email it to a friend!
Email sent!