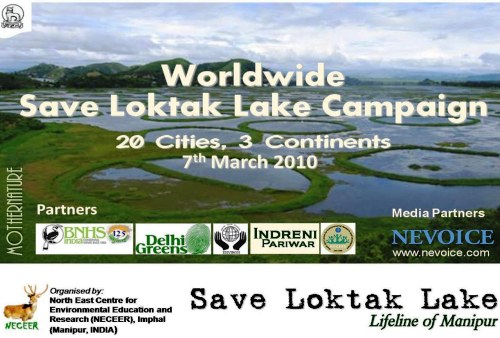 Considered to be the lifeline of Manipur state, North-east’s largest freshwater lake – Loktak – is today in a sorry state. Already declared a Ramsar site- a status given to world’s most threatened wetlands, this rapidly degrading lake has a total area of 300 sq. km. It is home to the endangered Manipur brow antlered deer ‘Sangai’ – Cervus eldi eldi and several plant species. Keibul Lamjao National Park, the only floating national park in the world is situated at the south west part of Loktak Lake.

Loktak Lake has been a main source of income and sustenance for inhabitants of the population living around it. However, since the last few decades the lake has been facing all round destructions due to natural as well as anthropogenic activities. Rapid expansion of ‘phumdis’, siltation, pollution, agriculture and adverse effect from Loktak Hydropower Project are some of the main problems which have led to an alarming destruction of the lake.

To raise awareness on the plight of the lake, and to draw attention towards an urgent need for action, the North East Center for Environment Education Research has partnered with Delhi Greens, and a series of environmental organisations in calling for an INTERNATIONAL SAVE LOKTAK LAKE CAMPAIGN on 7th March 2010. The event is taking place in 20 cities across three continents. Delhi Greens invites you to the Delhi chapter of the campaign at Gandhi Darhsan, Opposite Rajghat.

The event will have eminent speakers including MP Thockchom Meinya Singh, Dr. Irfan Quereshi from Jamia Millia Islamia, etc. who would be expressing their concerns over the issue. A poster competition for school and college students has also been organised.

One thought on “Invite: Worldwide Save Loktak Campaign at Gandhi Darshan”