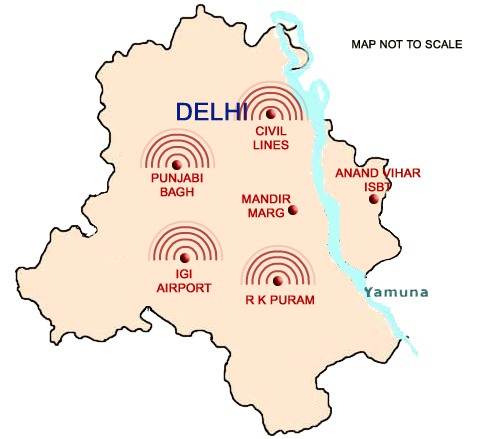 Maintained by the Delhi Pollution Control Committee (DPCC), the online database of Delhi’s ambient air quality reveals concentration of pollutant gases along with particulate matter concentration and the given meteorological condition through a state-of-the-art interface.

Air quality in New Delhi has seen severe deterioration in the past decade mainly due to the rapid and steady increase in the total number of automobiles on the Delhi roads. In addition, rampant construction work and an increase in the population of the city has only added more pressure to the city’s air quality. An increasing concentration of carbon monoxide (CO) in the Delhi’s air is the most widespread air pollutant and the gas could well be lethal under certain conditions.

According to published reports, Delhi’s air quality had significantly improved in 2001, after the implementation of Compressed Natural Gas (CNG) as a fuel for all public transport vehicles. However in the latter half of this decade, the city’s air was becoming as polluted as before.

Proactive measures by the Delhi Government’s DoE such as large scale plantations, creation of city forests so as to increase the city’s tree cover and promotion of public transport in the city has helped greatly to reverse the trend yet again and make Delhi’s air breathable. On October 31 2009, the Delhi Government de-commissioned the coal-based IP power station which had already outlasted its normal life (25 years for coal based power generating stations) which further helped bring down air pollution in the city.

However still, a lot more needs to be done to maintain this trend and keep the city’s air clean. The online air quality monitoring is definitely a good step to keep the citizens informed and aware of the city’s air quality, its impacts and involve them in keeping the environs clean. The tool will also help environmental students, researchers and academicians in obtaining data in a timely manner.