New York Bans Use of Elephants for Entertainment 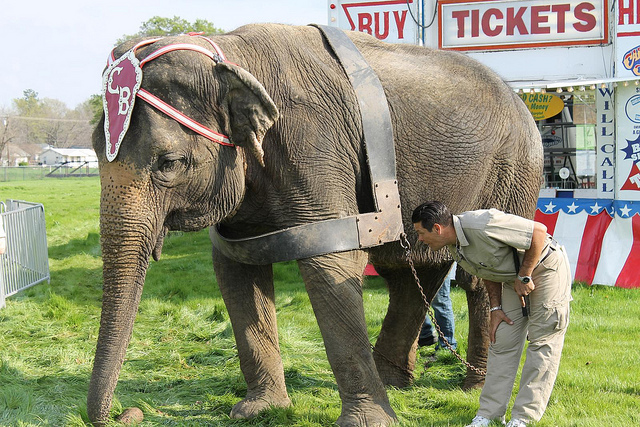 A Bill that bans the use of elephants in circuses and other forms of entertainment is headed to Governor Andrew Cuomo for his signature following passage in both houses of the New York State legislature. The “Elephant Protection Act,” originated and lobbied by students of the Pace University Environmental Policy Clinic and supported by The Humane Society of the United States, cites the “physical and psychological harm due to the living conditions and treatment to which [elephants] are subjected.”

Students of Pace’s Environmental Policy Clinic devoted their spring semester to assuring passage of the legislation which would make New York the first state in USA to institute such a ban. They maintain that the methods used to train elephants have a direct impact on the survival of the species.

“The Elephant Protection Act reflects the values of my generation, who don’t want animals to suffer for the sake of human entertainment,” said Paola Idrovo, a student in Pace’s Environmental Policy Clinic. “Through the experience of writing and lobbying for the bill, we gained a first-hand understanding about the cruelty to which entertainment elephants are subjected and how that threatens the entire species.”

On the issue of the Ban, Senator Terrence Murphy said, “It is a fact that elephants used for entertainment purposes suffer irreparable physical and psychological harm that shortens their lifespans. They spend a significant portion of their lives crammed inside trucks, trains or trailers, and then they are poked, prodded or shocked into performing tricks. Thankfully, we have come to our senses as a society and we no longer tolerate the abuse of performing elephants.”

“Elephants are a treasured species, and there is growing popular support for their protection,” said Brian Shapiro, New York state director for The Humane Society of the United States. “We applaud Senator Murphy and Assembly member Paulin for their leadership, and respectfully urge Governor Cuomo to sign this historic bill into law.”

The Pace Environmental Policy Clinic trains undergraduate students through a program of learning and service that encourages students to apply their Pace University education to the solution of real-world problems in the professional world.