Of Being Tactful, For the Sake of Human Dignity 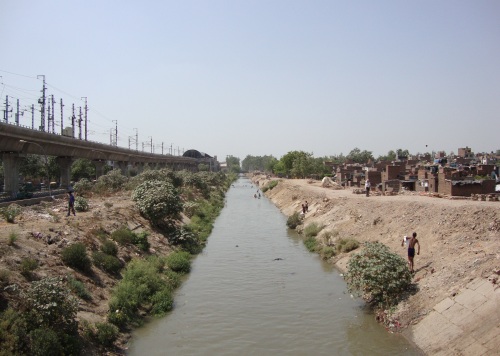 The Western Yamuna Canal Overlooking the Delhi Metro: If you thought the Indian Railways track was the world’s longest public toilet, wait till you visit this.

Cleaning the Yamuna needs a plan that ensures that waste water generated in the city does not reach back into the river untreated. The technology needed to operate these facilities is not very difficult, nor is the O and M costs very high, if there is a committed agency that wants it to happen for 40 percent of the JJ slum dwellers.

Ever considered that the ultimate form of protest of the weak is to do what they are told not to do by people in authority, by doing so they have the satisfaction of being noticed and not ignored by authority. The ultimate weapon of the weak is instead of protesting vocally, they resisting domination and subjugation of every day life, by defecating in the open.

Being tactful and not embarrass the elders and urbanites when you share with them your ideas about living in urban areas, is an important challenge for people like us who are working in the development sector to improve physical urban environment. Among other things about cleaning the environment, it involves defecating in enclosed areas. This idea is to be shared in such a way, that they do not feel that they are seen as adamant, stubborn or morons.

The idea is to be shared in such a way that they are moved by the possibility of a clean environment in such a way that they feel that it is good for them and for others. The idea of living in an urban area as respectable human beings — as valuable members of a community — is always inspiring. This feel good inspires them to take action. These actions are not difficult to take, if the local urban authority wants them to take it, provided they are granted the dignity of being humans in an urban area.

Being tactful for enrolling every one into the idea of being human and taking action of using toilets–the ultimate grace that we grant ourselves while living in cities.

Views: 15,466
Share this ArticleLike this article? Email it to a friend!
Email sent!