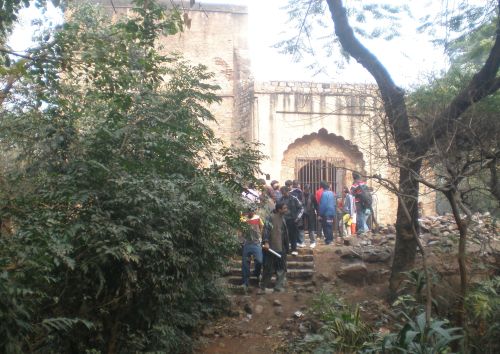 An earlier blog post dealt with the concept of garbage. The term is a function and reality of man-made systems. The word has existed since the very beginning and is also part of cultural history. The post referred to the term garbage as waste generated from the use of raw material needed for cooking and living our everyday lives. The residual – garbage – impacts the physical ‘environmental’ quality of our lives.

Here is a possibility that it may also refer to a part of socio-religious city space. Thus defined, garbage will be identified in quite different ways and would refer to built spaces in a city, with very different visible outcomes.

Cities tend to grow in concentric circles. Delhi is no exception. We have reference to our city being built nine times over and every time it made a new beginning, defined a new city centre and grew outwards in concentric circles, by different systems of bureaucracy generated by the rulers of that time depending on their priority.

This means that when a certain systemic condition changes the old structures created by a system, anything that is in public domain become garbage, to be ignored, destroyed or starved of resources. So unless the ruling elite steps in to salvage the physical structures, once the public building stops being useful and functional it only remains as a historical cultural artifact to be preserved or ignored by the political order of that time.

And yet there is a religious cultural value that communities put on these monuments and is often visited by people from outside Delhi in bus loads on specific occasions. The Urs Mahal neighborhood in Nizamuddin comes to mind, but there are many more, within Delhi. With visiting people comes food and other entertainment stalls for people to shop and eat, and places to sit and rest, often the sides of the nearby road.

All this because in spite of popular demand for this structure or monument, the people who visit it are not considered significant enough, to be provided with adequate facilities proportionate to their numbers. All this because these cultural-religious monuments of old times are now defined as ‘garbage’.

Now contrast this with the Commonwealth Games facilities being constructed to understand the difference.

Views: 8,394
Share this ArticleLike this article? Email it to a friend!
Email sent!