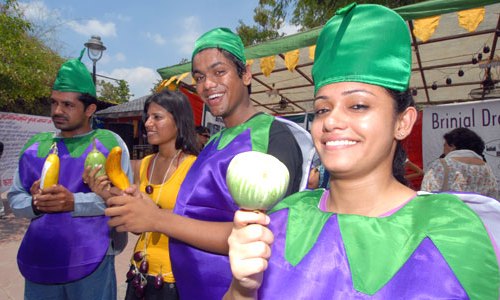 Human Rights Law Network (HRLN) requests the presence of all concerned to the Indian People’s Tribunal (IPT) on the issue of Genetically Modified (GM) seeds/foods and Bt Brinjal in particular. HRLN is bringing eminent speakers and researchers from across the country to share a common platform and vocalise their experience and opinion on January 28th and 29th, 2010, at Vishwa Yuva Kendra, New Delhi.

The regulators in India have cleared Bt Brinjal as safe for human (& animal) health and environment and that it could be permitted for commercial cultivation in India. However, the Government of India is holding nation-wide consultations to address numerous concerns and unanswered questions on the GM food crop before reaching a logical end. Bt Brinjal is the first GM food crop in India and the first ever GM vegetable in the world with the Bt gene in it. This Tribunal is being held as a platform to not only address the surrounding queries but also highlighting the many facets of the debate on GM seeds.

Without really getting lost in the larger debate around food/hunger crisis, which is being made into the rationale for bringing in Bt Brinjal iisue, this People’s Tribunal focuses clearly on GM seeds, their relevance and need and other related issues, even as all presenters of testimonies will be encouraged to touch upon some larger issues too and present data to support their case.

A panel of prominent citizens, journalists, judges, scientists and activists will preside over the two-day IPT.

HRLN strongly hopes and looks for your support in this two-day programme, so that it will serve for larger social and political change in perceiving the issue. We anticipate the tribunal will be an indicator for civil society to rethink of a new set of strategies, to compel the State for immediate intervention to address the GM seeds/food debate.

Concerned individuals who would especially like to attend the IPT on the 29th of Janary are requested to kindly confirm  their presence in advance so that necessary arrangements can be made in due time.

One thought on “Invite: Indian People’s Tribunal on GM and Bt Brinjal”

Views: 8,177
Share this ArticleLike this article? Email it to a friend!
Email sent!