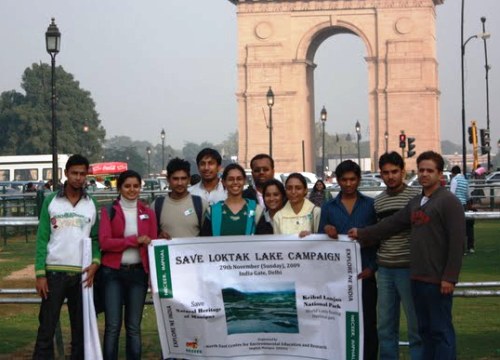 Save Loktak Lake campaigners at India Gate in New Delhi

Delhi Greens is proud to partner with the North East Center for Environmental Education & Research (NECEER), Imphal in calling for March 7th, 2010 as a Worldwide Loktak Campaign Day! Being coordinated by NECEER in 20 cities across 3 continents, the day is being marked as a worldwide attempt to raise awareness on the world’s only floating National Park – Keibul Lamjao – which is central to the Loktak Lake, the largest freshwater lake in North East India.

The Loktak lake has been a main source of income and sustenance for inhabitants of the area. Since the last few decades, the lake has been facing all round destruction owing to both natural and anthropogenic activities. Rapid expansion of ‘phumdis’ (floating islands!!), siltation, pollution, agriculture and adverse effect from Loktak Hydropower Project are some of the main problems which had led to an alarming destruction of the lake. This has also threatned the already endangered Manipur brow antlered deer ‘Sangai’ – Cervus eldi eldi and many plant species that are endemic to the region.

To volunteer for the Worldwide Loktak Campaign Day in Delhi, write to mehnazlee(a)gmail.com or to aastha(a)delhigreens.org. Visit NECEER.Imphal for updates, or subscribe to the Delhi Greens blog!

Views: 6,224
Share this ArticleLike this article? Email it to a friend!
Email sent!