Trip to the University of Petroleum & Energy Studies 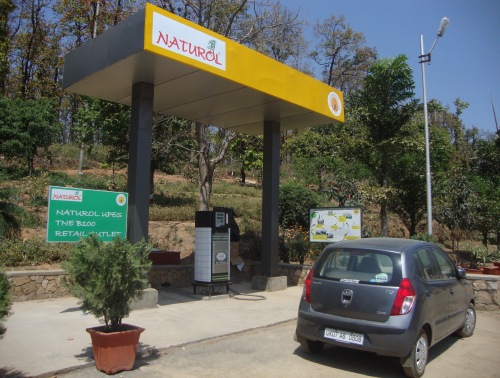 ‘Naturol’ the biofuel outlet at the University of Petroleum & Energy Studies

The invitation by the NEN to deliver a talk on environment and entrepreneurship at the University of “Petroleum” & Energy Studies (UPES) came as a surprise for most of us at Delhi Greens, while others saw it as an opportunity to sow the ‘green’ seeds in the students there. Nevertheless, we accepted the invitation and were on our way to the capital of Uttarakhand, located in the beautiful Doon valley.

The name ‘Doon’, meaning a river valley between the small Shivalik ranges on one side and the mighty Himalayas on the other, initiates a picturesque thought process in the head! It is said that the present town of Dehradun was founded in the early eighteenth century by Guru Ram Rai, the elder son of seventh Sikh Guru Har Rai, and the founder of the Udasin Sect of Ascetics. When exiled in 1675, he came and settled in a village here, thus the name referring to his Dera or settlement. The valley also finds mention in mythology and is presently on its way to become a one of its kind education hub in the region.

On arrival at the UPES, the experience was different than what we’d initially expected. The first site which greeted us was ‘Naturol‘, a biofuel outlet as an alternative to fossil fuel, located just at the entry point and managed by the institute. Experts have suggested that only a right mix of the different fuel kinds will make the right energy policy for sustainable development of the nation as a whole. The UPES has already taken the lead in including this in its curriculum and a major proportion of energy requirements of the institute, located away in the hills, is met through non-conventional sources.

A quick interaction with the faculty followed by an interactive presentation made to the students and judging a ‘Jugaad’ competition convinced us that there is more ‘green’ to the institute than what meets the eye! That this country has more solutions than the world has problems, was beautifully exemplified by the ‘energy’ and enthusiasm of the students there in ways more than one. That the solutions need the right kind of nurturing for them to be able to make a significant impact was something the UPES faculty seemed keen to help ensure.

Another presentation next day and some more interaction with the students ensured that we motivate the students to get even more active, initiate an eco club, write to us and stop waiting and start acting. The students of engineering and MBA in the Energy Sector, are indeed the right people that need to understand the status of today’s environment and be ready to make some tough calls in the right direction. It was glad to see that our generation has understood that very well and is choosing the right path!

One thought on “Trip to the University of Petroleum & Energy Studies”

Views: 7,700
Share this ArticleLike this article? Email it to a friend!
Email sent!