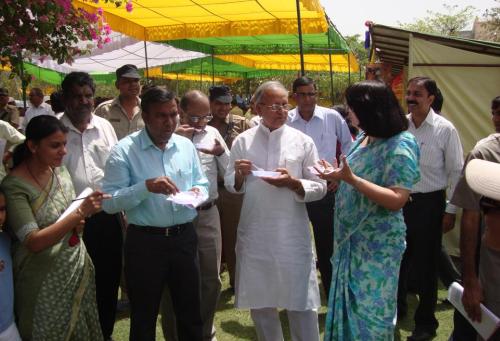 Haryana State Renewable Energy (Akshay Urja) Minster Mahender Pratap Singh, along with other guests at the Energy Fair 2010 in Gurgoan

Delhi is one of the fastest growing cities in the world and is already a megalopolis of a large magnitude. The rapid urbanization of the city has put a tremendous pressure on the resources which has made the city an energy guzzler. The ecological footprint of Delhi is increasing each passing day and the city has now spread to include even the neighbouring towns.

The National Capital Region (NCR) status that the capital city and its satellite towns enjoy, comes with much strain on the natural resources of not just the Delhi conurbation, but that of almost the entire nation. 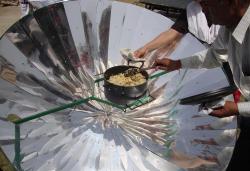 With this as the backdrop, Delhi Greens partnered with Advit Foundation and the Haryana Renewable Energy Development Agency (HAREDA) for the Energy Fair 2010 in ensuring that Renewable Energy is adequately promoted and included in the urban development policies and practices of all satellite towns around Delhi, starting with Gurgaon.

While Delhi has already seen development of different proportions, the satellite towns are now catching up with pace as they metamorphose into specialized towns catering to the needs and requirements of different sections of the city people. Since the towns like Gurgaon, NOIDA, Faridabad, Ghaziabad, etc. are now in the phase of rapid development, this should be seen as an opportunity to ensure a shift to the green economy by introducing renewable energy as a key energy mix for meeting the needs of the present and the future generations in the entire NCR.

In the climate challenged world of today, where development itself is climate constrained and the the threat of global warming looms large, only a shift away from the fossil fuels can ensure sustainable development and a future which is clean, healthy, secure, and above all, more promising.

Views: 6,061
Share this ArticleLike this article? Email it to a friend!
Email sent!