Yellow Bliss in the Greens of Delhi 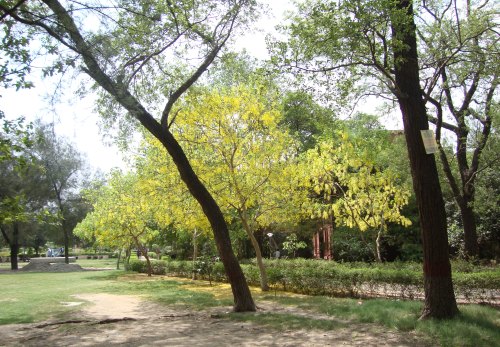 Commonly these trees are called “Amaltas or Laburnums”, but lovingly I call them “yellow bliss”. Travelling the Delhi’s road has never been so delightful making the traffic madness a bit lighter to bear. Looking at the yellow flowering Amaltas trees, I bet you can’t help but be delighted and whisper a silent thanks to the hands that planted them and bless the minds that drove such initiative of planting.

The Department of Environment, GNCT has been one of the dedicated departments in terms of tree plantation and greening of the capital city. Also, a lot of other social organizations working hard to make the city a better place need a special acknowledgment. A simple word like ‘thank you’ could do magic and act as balm of encouragement to many tiring souls and hands. So here I am doing my part and wishing it to serve its purpose.

Internationally known as the national flower of Thailand, Ratchaphruek (Cassia fistula) tree bears beautiful yellow cluster-shaped flowers. It’s interesting to know that the tree sheds its leaves while the flowers blooms, leaving only bright yellow flowers hanging on its branches and hence it is known as the “golden shower” by the Thai people. The Ratchaphruek blooms annually from February to May and has numerous medicinal benefits. It is commonly used in Ayurveda to treat constipation, skin diseases, and inflammations. It is believed that Amaltas is the safest laxative to be used in cases of constipation.

Recently, as I was traveling in a bus on the embassy road, I felt the magic of such beauty taking over my mind and soothing my senses. The guy who was sitting behind me suddenly joined the radio FM playing the old melodic song “Patthar ke sanam” and sang each word of the lyrics so correctly yet in such annoying and sharp voice. Without warning, a faint smile came on my face and I just tolerated his voice till the song ended. Unlike other days especially in the heat, I realized that I could go through such ordeal thanks to my yellow bliss…that stole my mind and focus.

It’s never too late to say ‘thank you’ ….and never a small thing to do!!

Views: 8,194
Share this ArticleLike this article? Email it to a friend!
Email sent!