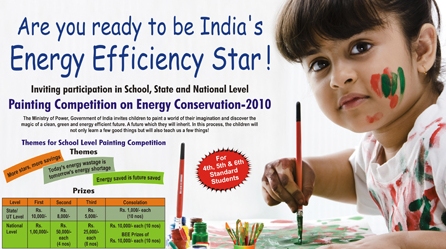 As part of the National Awareness Campaign on Energy Conservation 2010, the Ministry of Power has announced a painting competition for school students at the State as well as National level. Inviting school children studying in 4th , 5th & 6th standard, the competition is a step towards generating awareness among the children on the need to conserve energy and will indirectly involve their parents.

The competition is being held at the School, State and National Level and has cash prizes worth Rs 33,000 per State/UT. The themes for the painting competition include the following – 1) More stars, more savings, 2) Today’s energy wastage is tomorrow’s energy shortage and 3) Energy saved is future saved. At the state level, the participating schools’ principals will select tw0 best paintings and send them along with information on number of students participated at the Nodal Official address of their respective State/UT by 12th October, 2010.

The Ministry has announced to include CBSE schools located outside India as well. The paintings received from these schools will be considered under a separate category and the Certificate of Appreciation will be sent under the signature of Director General, Bureau of Energy Efficiency. It is requested that they send two best paintings directly with all requisite details at the Bureau of Energy Efficiency (BEE) office address at Sewa Bhawan, R.K.Puram, Sector-1, New Delhi-110066 (INDIA).

Within the country, paintings are to be sent only at the address of respective Nodal Official of the State/UT and not on the addresses of Ministry of Power and Bureau of Energy Efficiency. For Delhi, contact details of the nodal official is given below:

Views: 27,786
Share this ArticleLike this article? Email it to a friend!
Email sent!