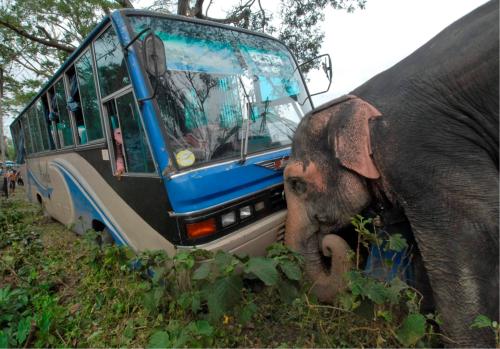 The Ministry of Environment and Forests (MoEF) recently released a Report of the Elephant Task Force (ETF) and announced the setting up of a National Elephant Conservation Authority (NECA) along with declaring the elephant as a National Heritage Animal. The specialized ETF was previously set up by the Ministry under the Chairmanship of Dr. Mahesh Rangarajan to address the problems related to the Asian elephant. The report calls for giving the elephant its due pride of place and its conservation, the same degree of visibility and importance as is given to the National Tiger Conservation Authority (NTCA).

India has some 3,500 elephants in captivity. The conflict between humans and elephants kills almost 400 people each year mostly killing people who die protecting their crops and affects over a half a lakh population. The survival of the animal thus depends on partnership with people. The Report suggests to launch an education and outreach programme called ‘Gaja to Praja’ to educate people to save elephants. Identification of high conflict areas between man and animal is also envisaged which will help in early conflict management work. Two agencies, Railways and Power Grid Corporation can play an important role in halting damage to elephants, as highlighted by Jairam Ramesh, Minister of State for Environment and Forests (I/c). After releasing the Report, Mr. Ramesh announced the mainstreaming of science based exercise in protecting and census of this animal.

The Task Force Report recommends a new system of assessment for elephant conservation at three tiers. The Report also stresses that the animal should be monitored on an age-sex classification and that the way forward for conservation of the elephant is through conservation of its habitat. To rationalise the boundaries of our protected areas after proper biological assessment, prioritize from among 88 elephant corridors and immediate implementation of conservation measures in 26 corridors which have vital feasibility, 50 years Perspective Plans instead of five year management plan (as this is a long lived species), inclusion of people who are knowledge bearers outside the government are some of the suggestions that the Task Force has made for effective elephant conservation.

Views: 9,980
Share this ArticleLike this article? Email it to a friend!
Email sent!