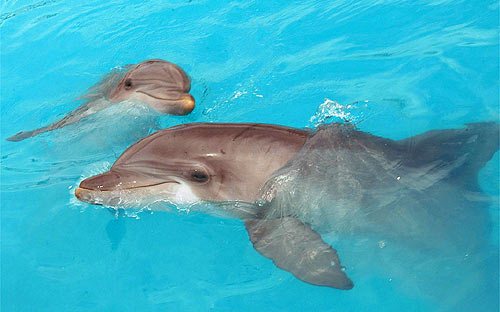 If there is any body which is consistently working hard for the biodiversity in this International Year of Biodiversity, amazingly, it is but the Ministry of Environment & Forests (MoEF).  And quite appropriately so! The MoEF has now notified the Ganges River Dolphin as the National Aquatic Animal of India. Recognized as ‘highly endangered’ in Schedule I of the Wildlife Protection Act (1972) with an estimated total population of around 2,000, river dolphins primarily occur in the Ganges-Brahmaputra river systems of India and Bangladesh.

The notification that came last week will, according to the Environment Minister Jairam Ramesh, will raise public awareness and support for the animals conservation and protection, especially among the younger generation. The Ganges Dolphin is among the four “obligate” freshwater dolphins found in the world – the other three are the ‘baiji’ found in the Yangtze River (China), the ‘bhulan’ of the Indus (Pakistan) and the ‘boto’ of the Amazon River (Latin America). Although there are several species of marine dolphins whose ranges include some freshwater habitats, these four species live only in rivers and lakes. The Chinese River Dolphin was declared functionally extinct by a team of international scientists in 2006.

The Ganges River Dolphin is threatened by river water pollution and siltation, accidental entanglement in fishing nets, and poaching for their oil. In addition, alterations to the rivers in the form of barrages and dams are separating populations. The National Ganga River Basin Authority (NGRBA) setup by the Government of India will spend Rs. 15,000 crores over the next ten years for cleaning River Ganga. This move is expected to increase support for the Government’s efforts to protect this vulnerable species.Previously, the MoEF has asked the Prime Minister to split the Ministry into two separate bodies, one for the Environment another for the Forests.

Previously, the proactive measures of the MoEF in promoting Eco-Tourism as the only means of tourism activity around tiger parks spread the rumour that a complete ban on tiger tourism could come  in a few years. The MoEF, in response to numerous requests from various stakeholders, is in the process of banning the trade of peacock feathers. It has been brought to the Ministry’s attention that the demand for the feathers outsrips the supply leading to the rampant poaching and killing of the birds for the purpose of their feathers. A comprehensive ban on the sale, transfer and trade of peacock feathers is being proposed.

4 thoughts on “Dolphin Declared the National Aquatic Animal of India”

Views: 32,436
Share this ArticleLike this article? Email it to a friend!
Email sent!