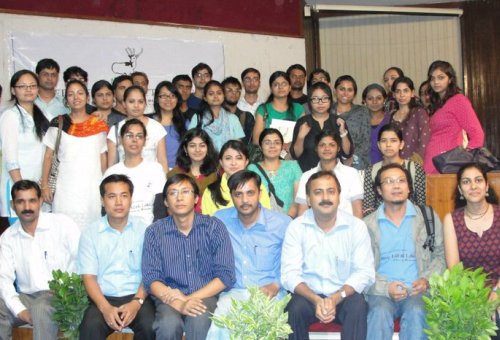 The “Enviro Lecture Series” organised by the Northeast Center for Environmental Education and Research (NECEER) in partnership with Delhi Greens and Jamia Millia Islamia was successfully conducted yesterday amidst the endless rain beating the capital city. Many young enthusiastic students and research scholars attended the lecture series which highlighted the environmental issues and impacts of climate change in the Northeast region of India. The event brought together prominent figures who are concerned and have worked in the region to share their experiences and thoughts with the delegates.

Dr. Sandeep Tiwari of the Wildlife Trust of India talked about the importance of the region in terms of its rich biodiversity and how the region supports numerous wildlife species. He was of the opinion that the greatest challenge faced by the region is lack of awareness and the region being too diverse. Many interesting facts about the kinds and numbers of species found throughout the region were highlighted. Presenting the other side of the diversity, Dr. Rita Singh, Associate Professor at GGS Indraprastha University, shared with the delegates through many exciting facts and figures of the plant species found across the region. Dr. Singh encouraged young students and research scholars to be passionate enough and take up the challenge to go out in the region and experience the richness. She also talked about how many have failed to comprehend the region’s rich diversity and neglected the real importance in pursuit of personal gains.

After the lunch break, another known figure Dr. Kiranmay Sarma of GGS Indraprastha University enlightened the audience with his expertise in the field of remote sensing and the relevance of GIS in conservation and protection of environment. Taking the audience through various methodical process and facts, Mr Sarma challenged the delegates to identify pressing issues and come up with relevant solutions towards saving the environment. The next hot topic of the lecture series was addressed by Govind Singh of Delhi Greens. Climate change and its impact on the Northeast region, a highly interesting topic for many participating delegates highlighted issues that the world as a whole is facing and how it is ‘our common environment’ which needs to be protected. Giving a brief introduction to what climate change is all about, Mr. Singh spoke on the importance of the Northeast region as the ‘Green Lungs’ of the country. The challenges faced by the region and how its preservation can impact and bring tremendous change in saving the environment of the country as well as the world as a whole was emphasised. The answer to the need of preserving and protecting the region’s rich biodiversity was linked to bioprospecting, on why we must work to save species from unnatural extinctions before we lose them forever. Keeping this in mind, the need and urgency of protecting the environment got more clearer and the delegates could not but agree to Mr Singh’s point.

Other speakers for the day included Dr. Irfan of Jamia Millia Islamia, M. Ojit Singh of Ramjas College, University of Delhi and last but not the least Mr. Khuraijam Jibankumar, Head of NECEER. A movie titled “Loktak Lake” by R.K. Robindro of Doordarshan Imphal Kendra was also screened during the event. The film displayed issues faced by the Lake and how human activities is affecting the natural heritage of Manipur state often referred to as the “Lifeline of Manipur”. The Lake’s importance doesn’t only limit there, it supports one of the largest vegetation called Phumdi which provides natural habitat to the endangered brown antler deer ‘Sangai’, found only in this region.

Besides the lectures and movie screening, the event hosted the ‘Young Achiever Award 2010’. It was awarded to Ms. Girija Thanjam, a flower enthusiast from the state of Manipur. She is a special educator and has a Masters degree in Psychology and a Diploma in Special Education (Autism). The first edition of NECEER’s quarterly magazine called “BioDiverse” was launched during the event by Dr. Rita Singh. This newly launched magazine is a step forward taken by NECEER in its endeavor to generate public awareness, education and research for the protection and conservation of biodiversity in Northeast India.

6 thoughts on “Successful Completion of Enviro Lecture Series on Northeast”

Views: 5,708
Share this ArticleLike this article? Email it to a friend!
Email sent!