Save Loktak Lake Campaign Begins in Delhi and Imphal 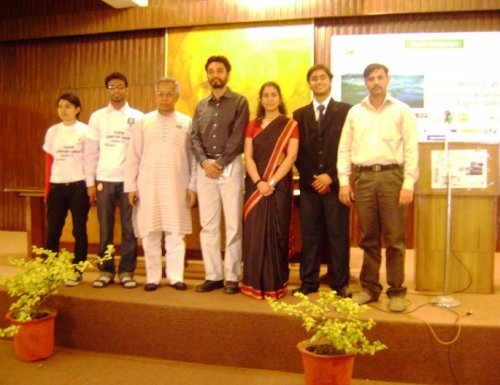 It is one of the largest freshwater lake in India’s North-East and hosts the world’s only floating island National Park – the Keibul Lamjao National Park, the last habitat of the less than 200 remaining population of Sangai, the brow antlered dancing deer of Manipur. And now, the rapidly degrading and much threatened Loktak Lake has a second chance – a voice at the Center and an echo from the region.

On 7th March, 2010, the North East Center for Environmental Education & Research (NECEER), in partnership with a series of organisations, launched an International campaign to Save the Loktak, hosted at the same time in New Delhi and Imphal.

The campaign was launched by a call to youth action on environment made by the dynamic Member of Parliament (Lok Sabha) Dr. Thokchom Meinya from Inner Manipur. This was followed by a note on the pathway for green action by Govind Singh of Delhi Greens and a talk on the science of conservation of Loktak Lake. An interactive session was followed wherein the youth had a series of questions and queries on the status of environment in Manipur, conservation strategies and government initiatives. A poster competition, a street play and a Manipuri folk dance followed this first ever world wide attempt at raising awareness and calling for action for saving the Loktak Lake.

In Imphal, the campaign was launched by well-known environmentalists like R. K. Ranjan, Kh. Shamungou, H. Meghachandra, O. Samoa all of whom expressed concern over the deteriorating condition of the lake. Issues such as the rapid expansion of weeds (phumdis), siltation, pollution and effluents from Loktak Hydro electric power project were discussed and pondered upon. The campaign aimed at involving the youth and mobilizing the general public for saving the Loktak Lake.

The energy and interest shown by the youth from the region and also from other parts of the country was overwhelming. The issue of insurgency and access to remote parts of Manipur state also surfaced during the course of discussions. MP Meinya suggested a political solution to the problem by suggesting that all eminent people in the state, of which there are plenty,  should be invited over a cup of tea, as a first goodwill gesture towards a more hopeful future. Govind Singh suggested that only when the importance of local self governance will be realized–in the true spirit that even Mahatma Gandhi had envisioned for independent India–and youth begin to participate in the democratic processes of the state can there be a hope for a peaceful and prosperous tomorrow.

The 7th March event was the first step and a landmark day for the International Save Loktak Lake Campaign. The NECEER and Delhi Greens remain dedicated towards generating awareness and inspiring green action for protection and conservation of the Loktak Lake ecosystem and will continue working for ensuring the same.

Views: 11,691
Share this ArticleLike this article? Email it to a friend!
Email sent!